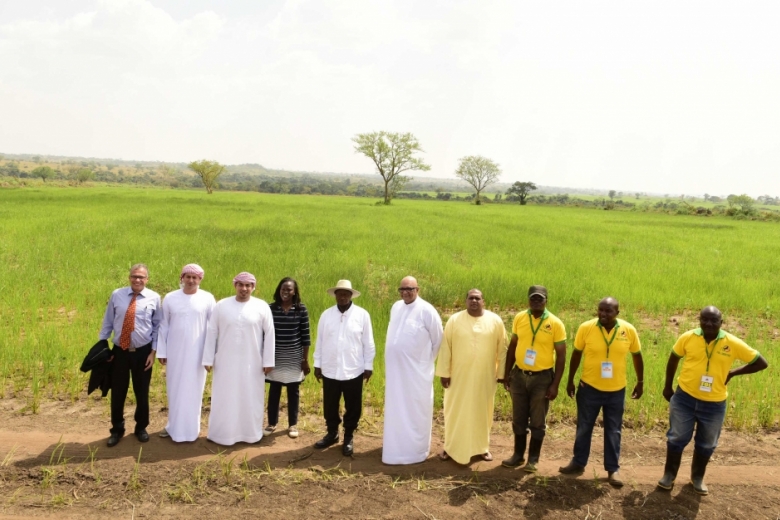 Speaking at the commissioning of the FOL Rice Farm in Lamoki village, Anaka Sub- County, Nwoya district in Acholi Sub-Region yesterday, the President said that Ugandans needed to understand the difference between modern and local farming.

He observed that commercial agriculture is good because it uses modern farming methods, which create a number of employment opportunities for the local population.

“When you are involved in small scale farming, you do all the labour as a family but when you are involved in commercial agriculture you cannot do all the work yourself and, therefore, you must hire people,” he explained.President Museveni added that unlike traditional farming, commercial agriculture allows high volumes of produce. He said that the FOL Rice Farm would help to fill 200,000 tonnes deficit of rice grown in the country.

“With over 40 million acres of land for agriculture, Ugandans are not producing enough rice and but are instead importing rice,” he said.

He said that Ugandans should not only stop at importing rice for eating but also start growing and exporting it. “Rice is not only for eating. You can get animal feeds, rice oil and electricity from the husks,” he advised.

President Museveni criticized the Uganda Wildlife Authority (UWA) for not taking action to help farmers. He called upon UWA to put up control measures around the Murchison Falls National Park boundaries so that animals do not disturb the people and destroy their crops.

“In Kanungu, they grow tea on the boundary of the Park and farms so that elephants fear crossing into gardens. I do not know the explanation for how tea stops elephants but they cannot pass near it,” he explained.

The President also warned cattle farmers who do not fence their land and leave their animals to destroy other people’s crops. He, therefore, called upon the Ministry of Agriculture, Animal Industry and Fisheries, to pass a law making it criminal for someone’s animals causing destruction to other people’s crops.

“I am glad that Nwoya is becoming a center for commercial farming and that you are offering me land for Industrial Parks. We need to replace towns of shops with factories,” he said.

State Minister for Investments, Hon. Evelyn Anite, thanked President Museveni and the NRM Government, for ensuring security in the country. She observed that peace and stability has encouraged investors to the area resulting in the creation of employment opportunities for the youth and contributing to the expansion of the revenue base of the country.

Nwoya district LC5 Chairperson, Mr. Okello Oryem, said that the district is committed to ensuring development and employment opportunities for its people. He said that Nwoya district has established an investment plan to guide it on development adding that the district has so far identified two pieces of land for construction of Industrial Parks and called on the President to find investors.

Dr. Hassan Sobhi and Mr. Akos Zolo, who spoke on behalf of FOL Logistics Uganda Limited, and the Chief Executive Officer, Mr. Mohammod Ahmed Bawizir, said that their company was not only committed to investing in full rice farming production but also improving the welfare of the people in the area.

“There are so many people who are doing large scale farming of water melons but the elephants from the Park destroyed all their fruits,” he reported.

FOL Logistics Uganda Limited, is a leading Ugandan business involved in the rice value chain from procurement, processing of rice paddy, warehousing, distribution and marketing of rice in Uganda as well as in the East African community. The company produces the Kingdom Rice brand and is headquarter at Namanve Industrial Park in Mukono district.

The company employs about 600 people with 200 on the farm in Nwoya and 6000 at Namanve. It is also changing the value chain of rice through development of commercial farming in Uganda, adopting sustainable and high productivity farming methods to support the rise of affordable consumption. FOL begun its operations of importing finished processed rice and later went on to import semi and unprocessed feedstock which processes and sells through distribution chain.

The company hopes to have farms in all regions of the country with a program that supports their out-growers with inputs like pesticides, seeds, tractor and technical practices such as modern farming methods.

According to Steven Byandala, the FOL Farm Manager, the company is currently experimenting growing rice that matures within 70 days. Nwoya farm produces 500 metric tones of rice daily and is hopeful hit an output of 450,000 tones of rice per year, enough to eliminate rice imports into the country.