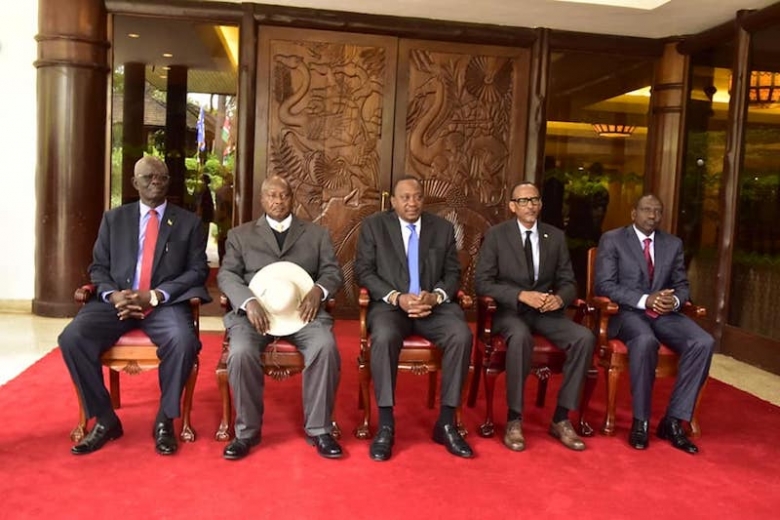 President Yoweri MUseveni has commended the East African Community for projects under the Northern Corridor Integration Projects that is spurring regional development.

Speaking at the 14th Northern Corridor Integration Projects Summit at Safari Park Hotel in Nairobi Kenya today (Tuesday), Mr Museveni said: "I am happy because for the last 50 years I have been working on these projects with elders like Mzee Kenyatta, Nyerere, Obote."

The Northern Corridor Integration Projects (NCIP) is a multilateral development initiative established in 2013 and is aimed at speeding up development in the region particularly the improvement of infrastructure for ease of movement of people, goods and services in the region.

Speaking on a raft of undertakings under NCIP, President Museveni began by directing the Uganda Revenue Authority (URA) to begin 24-hour operations to avoid delays especially at the borders.

"I want to apologize on behalf of Ugandans. Since Uhuru (Kenyatta) came, things have been moving fast. But Uganda Revenue Authority works half a day. I am embarrassed on their behalf. They must work 24 hours," said the President.

On the electricity line to Rwanda through Mirama Hills, President Museveni announced that the project was 75 percent complete and would be fully operational by this October.

"Uganda is doing something near Entebbe and I know that Rwanda is also doing something too. We should be able to go down on water from Lake Victoria to River Kagera," he said.

The President, who challenged technocrats to pay attention to this Victoria-Kagera water project, said it had the possibility of causing exploitation of iron ore in the area.

"A good water transport system would help this project of steel which currently cannot take off because of cost. We have no coal in Uganda but there is abundant gas in Rwanda in Lake Kivu. Subsequent meetings should look at integrating these sectors," said the President.

Speaking about the gains of an integrated community so far, President Museveni said Uganda was reaping by being able to sell its surplus milk (1.7 billion litres) and excess maize (4 million tonnes) to its neighbours.

Speaking at the close of the summit, the host President Uhuru Kenyatta underscored the immense benefits of the joint interventions initiated under the NCIP since its inception in 2013.

“It is definitely good news for our citizens,” he said, as he cited joint actions including the single customs territory that has resulted in reduced transit times and cost of goods. President Kenyatta assured his colleagues that Kenya will  sustain the momentum with the remaining phases of the SGR to reach the Kenya-Uganda border town of Malaba.

The Summit was attended by Presidents, Yoweri Museveni of Uganda, Uhuru Kenyatta of Kenya and Paul Kagame of Rwanda while Salva Kiir of South Sudan was represented by special envoy Aggrey Sabuni who is the Presidential Adviser on Economic Affairs.

Leaders were particularly impressed by Kenya's commitment to a modern railway network, having completed and launched the first phase of the SGR from Mombasa to Nairobi and commissioned the second phase from Nairobi to Naivasha.

In the joint communique, the East African leaders reaffirmed commitment to advancing regional integration while underscoring the importance of accelerating socio-economic transformation, industrialization and employment creation.

Notably, the Summit considered and adopted the Accession Treaty to the Mutual Defence Pact, and agreed to finalize an agreement on the establishment of a Centralized Aeronautical Database (CAD) for the Northern Corridor Airspace bloc.

Operations at the Mombasa Port, a key entry and exit point for cargo in the region, was also discussed; with the leaders directing responsible agencies to ensure efficient and seamless clearance and movement of cargo.

Kenya’s Deputy President, William Ruto and representatives from Tanzania, Burundi and Ethiopia, countries which have observer status in the NCIP, also attended the meeting.

Various Ugandan Ministers attended the summit. These included that of Foreign Affairs Sam kuteesa, that of Finance and Economic Planning, Matia Kasaija, of Trade, Industry and Cooperatives, Amelia Kyambadde, that of Works, Eng. Monica Azuba, of ICT, Frank Tumwebaze, that of Security Gen. Elly Tumwine and that of Energy, Eng. Irene Muloni, among others.

The heads of state agreed to hold the next Summit in Kigali Rwanda at a date to be communicated.