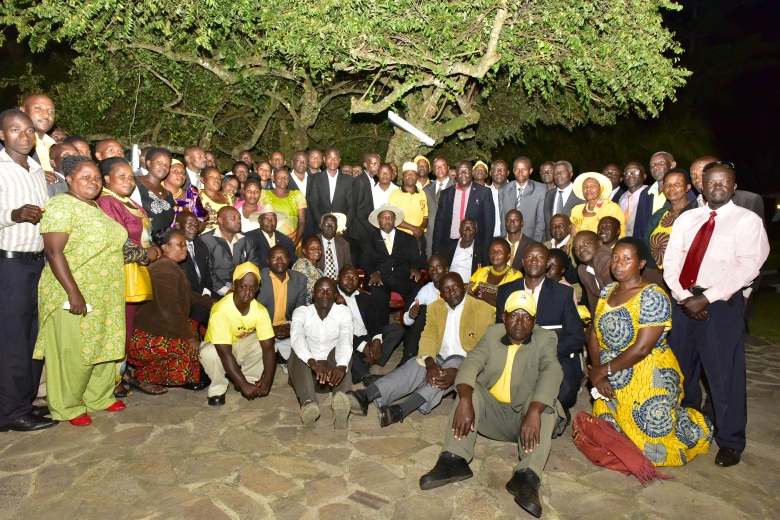 President Yoweri Museveni has urged the people of Greater Bushenyi area in South Western Region in particular and Ugandans in general to engage in income generating projects through embracing commercial farming in order to banish household poverty.

The President was last evening meeting members of the Nyekundiire Group from Greater Bushenyi at his country home in Rwakitura, Kiruhuura district. He commended the group for spearheading the gospel of the National Resistance Movement (NRM) that is anchored on prosperity and transformation of the masses in Uganda from subsistence to commercial farming.

“Thank you for keeping the NRM fire burning. Where the country has reached is not bad. The country is now revived and there are factories all over," he said.

Mr. Museveni told the meeting that he had directed members of the Operation Wealth Creation (OWC) to focus on the production of cash crops rather than on food crops in order to create more impact for the masses in the struggle to banish household poverty. The President said that Movement Government has revived the economy that had collapsed in the face of the past governments. He noted that on top of the traditional crops of tea and tobacco, the country now outs maize, milk, coffee and palm oil, among others.

Addressing himself to job creation, President Museveni noted that the government has put in place the necessary infrastructure, such as roads, electricity and peace, that are all aimed at attracting investors and establishment of factories so that employment opportunities are created especially for the youth. He stressed that the youth should be guided on how to engage in meaningful projects instead of wasting time on social media platforms, such as watsapp, facebook and the like.

Mr. Museveni strongly warned against land fragmentation and said that the practice renders small pieces of land uneconomic in terms of production.
"The leaders should educate people to stop dividing land and other bad inheritance practices," he emphasized.

He, therefore, asked the leaders to champion the crusade of educating wananchi in the fight and banishment of household poverty.

The people of Greater Bushenyi area, through their leader, Mr. Godwin Beyamba, commended the President for the development in their area and pledged to work with the Movement government to ensure the intensification of projects under Operation Wealth Creation as well as the improvement of roads in order to reach the grass root people. They congratulated the President for overwhelmingly winning the February 18th 2016 Presidential elections.