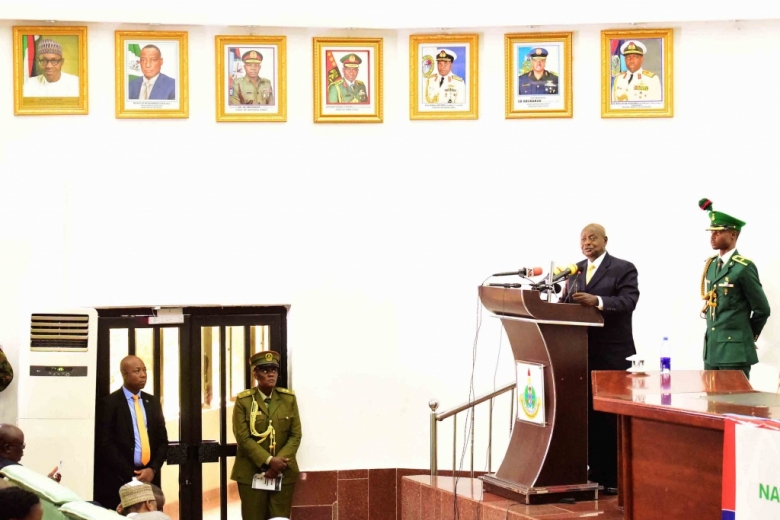 Africa must work for prosperity through integration but more importantly, dedicate resources to ensuring strategic security, President Museveni has said.

President Museveni was speaking as a special guest of honour at the National Defence College of Nigeria in Abuja during the inauguration of the institution’s 26th class.

The elite senior officers’ class of 140, has students from 19 countries—including the host, Nigeria.

President Museveni, who was accompanied by First Lady Janet on the two-day working visit, was invited to deliver a lecture on the theme “Sub-regional cooperation and the stability of member states…Economic Community of East African States in Perspective.”

Africa, he noted, had been the cradle of man, pioneer of civilisation and saviour of all modern religions, yet it had fallen to a host of afflictions which had ensured the continent was the most backward now.

“In the last 500 years, Africa has gone down. It has suffered all manner of afflictions, slave trade, colonialism, genocide, marginalisation, diseases,” he said.

“We should examine how the first became the last in the last 500 years. How could former Africans come and colonise us­­­­­?” he asked. “Our academicians must answer that question. Except for Ethiopia, the whole of Africa had been colonised by 1900.”

Offering an answer, President Museveni said, “The problem was poor political organisation. Colonialists found us badly organised—as tribes, clans, a segmented society. It was easy to attack us one by one. We were at a disadvantage—of inadequate political integration.”

He also dismissed the notion that colonial masters had better military technology, pointing out that some of machines they used like muzzle-loaders were less efficient than weapons like spears.

President Museveni also cited examples of other groups like the Chinese, Japanese and even Ethiopians who were better organised politically and therefore fended off colonial aggression.

A case for markets

Noting that Africans are similar and linked through the four major linguistic groups (Niger-Congo, Nilo-Saharan, Afro-Asiatic and the Koisan), President Museveni said the solution now lies in exploiting these linkages to foster integration and prosperity.

“The anti-colonial struggle was three-pronged, independence, democracy and prosperity,” he said. “We asked, how can people be prosperous in the modern sense?”

The President said prosperity is driven by production and sale of goods and services, supported with availability of market.

“With no market, you can’t prosper. We therefore need a bigger market, explaining our push for integration,” he said. “Many Africans thought occupying administrative positions left by colonialists was enough. Permanent secretaries, undersecretaries, all types of secretaries—but that is not wealth. Where is the production?”

It is on that basis that he commended African leaders, who in 1980, came up with the Lagos Plan of Action that led to creation of the key regional blocs.

To stress the importance of large markets, President Museveni cited the example of China which by 1978 had a GDP of $218 billion but has shot up to $11,202 billion now after it opened up to the rest of the world.

“What has stimulated this? Chinese leaders realised that a big internal market alone was not enough, they had to trade with other countries.”

Alongside prosperity, the continent must ask if it is secure, added President Museveni.

“If we become prosperous, are we secure? You can be prosperous but not secure. How can Africa ensure strategic security?” he asked.

The President pointed out that the first victims of the World War 2 were the prosperous but weak countries like Holland, Belgium and France.

“Prosperity, therefore, does not always guarantee security. What then is the strategic security anchor for Africa? If we get problems, who will stand for us?”

This question, he said, is what is pushing the quest for both political and economic integration to achieve strategic security.

“We are convinced that without political federation of East Africa, we have no strong individual country to anchor East Africa,” he said.

The push for an economic federation, he noted, had also bore fruits of prosperity, citing Uganda’s excess 1.2 billion litres of milk and three million tonnes of maize that are consumed by its neighbours.

Federating, said President Museveni, was also key in negotiating with third parties for markets, as EAC can front its 170 million people as a factor for fair trade.

The President also encouraged Africans to preserve their culture and avoid misusing human resources by pushing for identity above interests.

Before commencing the lecture, the class congratulated President Museveni on his 73rd birthday, which happened yesterday, singing him a birthday song.

The commandant of the college, Rear Admiral AA Osinowo and Nigeria’s Defence Minister Mansur Muhammed Dan Ali also presented the President with a birthday gift of a bust (a sculpture of President Museveni).

After the lecture, President Museveni, First Lady Janet and their delegation which included Uganda’s High Commissioner to Nigeria, Nelson Ocheger, were hosted to a luncheon by President Muhammadu Buhari.

In brief remarks to the media after the luncheon, President Museveni thanked his host for the luncheon, adding that the two countries would presently strengthen their relationships through collaborations in institutions like the National Defence College.

In the long run, President Museveni noted, trade and bilateral relations would become even stronger once Uganda establishes an airline and begins plying the West African route.