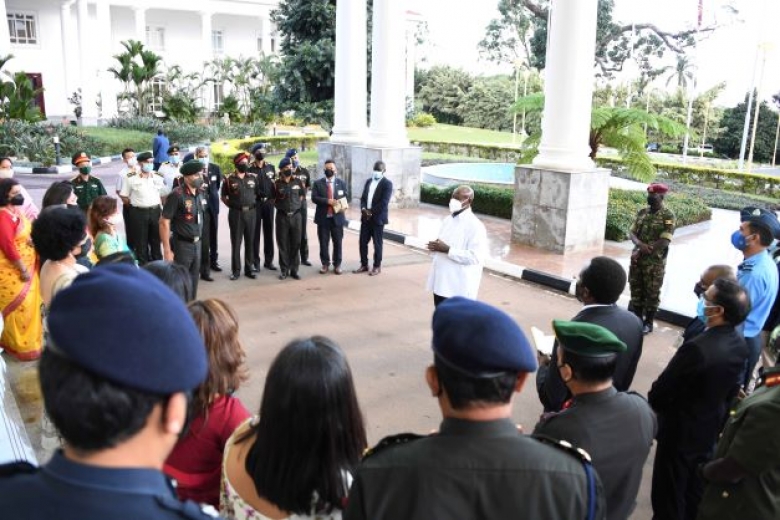 President Yoweri Museveni has said that there is a need for African countries to unite for the sake of the continent’ security. He made the remarks at State House, Entebbe where he delivered a lecture to a 17-man delegation of Officers from the New Delhi National Defense College, ten of whom were accompanied by their spouses. The delegation was led by Brigadier Anil Pundir.

President Museveni addressed the participants with particular reference to the evolution of mankind and its development in Africa. He also highlighted the evolving situation over the India – Uganda relationship stand.

The President said that our countries must be formed into units that will ensure Africa’s security citing that strategic security must be addressed. He noted that the first principle of the NRM Government is patriotism which calls on everyone to love Uganda more than anything else. “By being sectarian, you fight against those who would provide you with a market for your goods and services, Mr. Museveni affirmed.”

He informed the delegation that when Idi Amin chased Indians out of Uganda it created a big shortage of commodities. However, when the NRM Government took over power, Indians were invited to return and other measures were taken to attract more investors to improve the economy. “This contributed towards our prosperity”.

President Museveni noted that the second principle of the NRM is to promote Pan Africanism. He called on the African population to always think of Africa as a united continent. He observed that this calls for the promotion of the Continental Free Trade Area (CFTA). He observed that socio economic transformation was a fundamental factor of development, pointing out that democracy was a sure case for attaining prosperity.

He informed his attentive guests that under-population has been Africa’s problem. He noted that in 1960 the continent had a population of 400 million, however today this figure has tripled to a commanding 1.2 billion people.

He also informed his guests that the continent has got four language groups, namely the Niger Congo, the Nilo Saharan, Afro-Asiatic and the Bushmen of South Africa and was pleased to note that Africa has got Kiswahili as its neutral language. He reiterated that language was very important for the future growth of the continent.

President Museveni said that Africa was mismanaged by the traditional chiefs and was highly manipulated by the colonialists. He said that for the case of Uganda, a new group of students emerged in the 1960s which played a leading role towards correcting the mistakes of the previous leaders. He said that this group addressed the issues pertaining to prosperity of the country noting that their view was that one becomes prosperous only by producing goods or services and having a buyer.

The President noted that previously our leaders practiced politics of identity along tribal and religious grounds.  However, when the NRM came to power it enlightened the people about their needs. “We discouraged the issue of identity and instead promoted and put emphasis on the collective interests of the people”. He warned that identity should never be used opportunistically since it was bound to cause challenges.

President Museveni later responded to some questions. On the issue of the disturbed World Order, he said that this was due to ideological, philosophical and domination mistakes. He reminded the soldiers that a war must be just in order to achieve durable results. He said that this was an opportunity for Uganda to work with India towards solving the global challenges. He reiterated that this is the time for sober-minded people to cooperate, warning that nobody should involve himself in a war that is not just.

President Museveni attributed the success of women in Uganda to affirmative action. He revealed that the NRM Government has among other measures enabled women to have Members of Parliament at the District level in addition to the open competition for Parliamentary seats.

The Indian High Commissioner to Uganda, H.E. Shri Kumar said that the visit of the military officers was a symbol of deep bilateral relations between the two countries. He was pleased to note that India has been training 40 Ugandans per year in various fields.