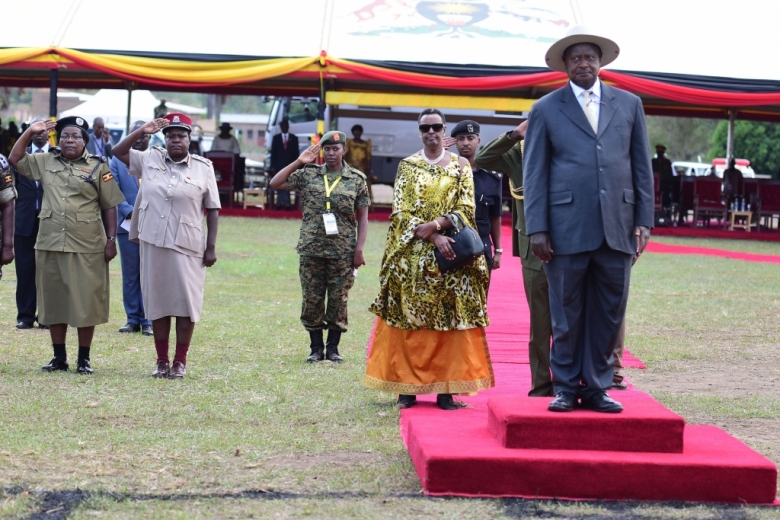 Officiated at the International Women's Day celebrations in Dokolo District.

First, I want to point out that when discussing women or child issues, they should not be isolated from the other issues of society. You can't empower them without addressing the issues of the community.

For example, how will you empower women without security? When you talk of women you should remember security and all the other issues.

When going to Dokolo I was doing an audit. I saw telephones. Everyone has a phone now. Everyone who came here drove on good roads. We now have electricity in Dokolo.

We have schools and health centers, reason the population has grown, especially due to immunization. When the NRM took power, there were just 14 million Ugandans, today they are 40 million--all these are NRM children.

Flying over Dokolo, I saw a lot of mabati houses which was not the case before. The housing in the villages has improved.

We also inaugurated a new water plant today at the district today.

All the intiatives I have mentioned above are meant to empower the women. Accessible clean water, for example, contributes to well-being of women because it reduces their work.

That said, the emphasis now is on loonyo (wealth) and tich (work). We are going to attract more factories. Those who live in Lira town can testify. The last I checked there were 44 factories in Lira, employing many people.

We therefore need to attract more of these now that we have electricity. Here in Dokolo I would like the people to offer 3-4 square miles of land so that when an investor comes, we have land to give him for a factory.

This will firm our three pillars of wealth creation; modern agriculture, factories and tourism.

I should also say something about the NRM's history with women. When in FRONASA and fighting Idi Amin, we had both male and female fighters.

But when we defeated Amin and had to unite with the other fighting groups, they blocked our women's entry into the army. The unit of female fighters based in Mbarara had to be disbanded. I was disappointed.

However, in 1986 we were in charge and we had women among our fighters. It is what you see now with this parade composed of only women. So there's nothing women can't do that men can do, if anything, they can do better because they can pass a thread through the eye of a needle.