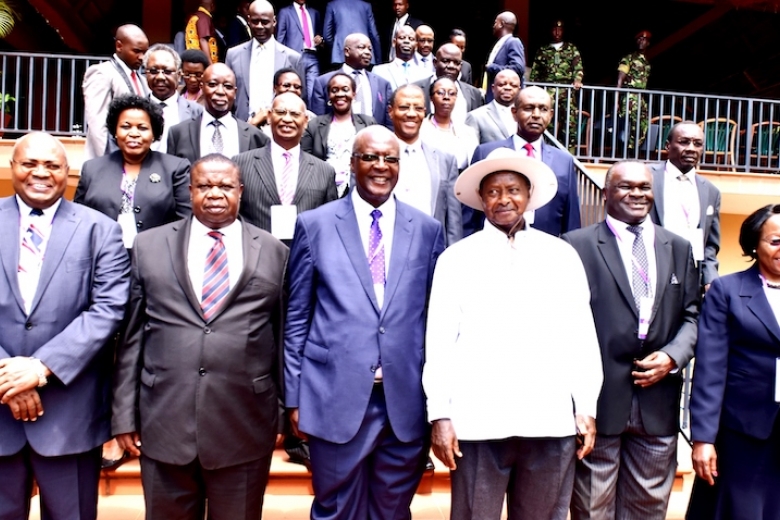 President Yoweri Museveni has said that the Government is concentrating on stopping resource wastage, corruption and under collection of taxes.

“We should work within the limited resources. The Government is concentrating in stopping resource wastage, corruption and under collection of taxes. Government is sorting out the under declaration of international calls through the various telecommunications companies. Their under-declaration leads to a loss in tax collections,” he said. He added that the new measures would enable the Central Government to have more resources.

The President made the remarks today while speaking at the opening of the 20th Annual Judges’ Conference at the Commonwealth Resort Hotel, Munyonyo in Kampala.

The 4-day conference that is running under the theme: ‘An inclusive Judiciary for Sustainable Development’ was attended by visiting Justice Norah McGowan who was accompanied by a team of trainers from the United Kingdom.

President Museveni asked the delegates how one can fund institutions in a country that is recovering from being a failed state. He observed that wastage must be avoided in the system and reminded the Judges that they must work towards the elimination of wastage and ensure coordination.

He, therefore, called on judicial officers to prioritize their work along issues pertaining to homicide, rape, commercial and land cases. He reminded them that these cases destabilize society adding that they need to be given particular attention. He revealed that the Government is now in a position to address the issue of salaries adding that Judicial Officers and lawyers in Government service should get comparable salaries to those in the region. He, however, cautioned against populist tendencies and selfishness.

Mr. Museveni noted that under the policy of prioritization Government allocated Shs.4 trillion to the roads’ sector while Shs.134 billion was allocated to the Judiciary in the 2017/18 budget. He emphasized that without setting up priorities, there is a risk of having no impact in service delivery to wananchi.

He commended Chief Justice, Bart Katureebe, for conducting barazas (town hall meetings) and observed that it is a very good innovation.

He observed that if the death sentence is removed, it would spell chaos and lead to instability because Uganda is a pre-industrial society. He, therefore, reiterated that he will remain firm on the Government stand on upholding the death sentence. President Museveni said that NRM, as one of its principles, upholds the independence of the judiciary.

The Chief Justice, Mr. Justice Bart Katureebe, commended President Museveni for transforming the country through a peaceful environment and also for enabling the automation of the judiciary. He observed that land disputes in the country have, in some instances, resulted in homicide cases.

The Minister of Justice and Constitutional Affairs, Hon. Kahinda Otafiire, revealed that the judiciary service had disposed off 175,000 cases in 2017. He was optimistic that the service would clear the backlog. He thanked the judiciary leadership for its commitment.