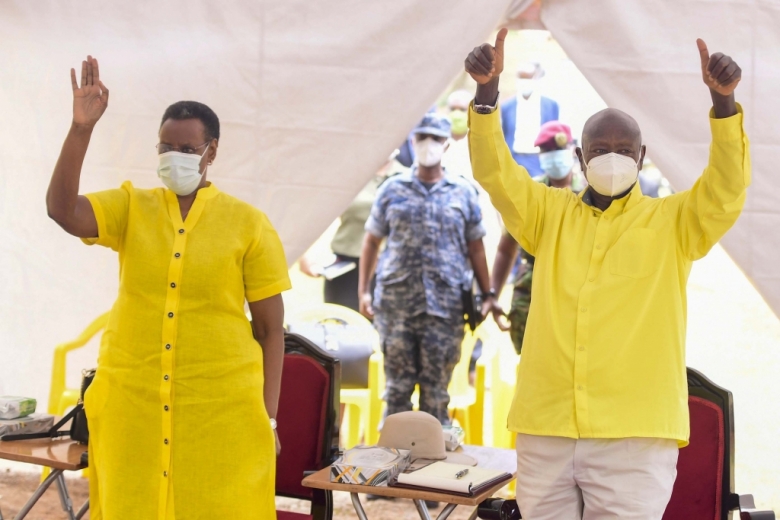 President Yoweri Kaguta Museveni has  been nominated as the NRM national Chairman and Presidential flag bearer in the forthcoming 2021 Presidential elections at a colourful ceremony attended by only a few selected leaders at the NRM Electoral Commission Offices in Nakasero.

Accompanied by the First Lady and Minister of Education and Sports Janet Kataha Museveni, the President was nominated by the Rt. Hon Prime Minister Dr. Ruhakana Rugunda and seconded by Hon. Gaddafi Nasur, Miss Aminah Nanziri and Miss Hellen Seku respectively. The President Museveni who was duly declared sole candidate by the NRM Electoral Commission Chairperson Dr. Tang Odoi after fulfilling all the necessary requirements immediately declared the biggest war to fight is COVID-19.

Speaking shortly after his nomination, President Yoweri Kaguta Museveni who thanked Ugandans for supporting him and the NRM, outlined measures top on agenda for the NRM party as; fighting Corona Virus, deepening modernisation, strengthening regional integration and Export promotion.

The President whose voice was hoarse said he developed a soar throat over the weekend and the first thing he thought was Corona. However, he was informed that talking for a long time with a face mask can be strenuous.

He also said doctors immediately took samples from him for testing all of which came back negative. The President made a short speech and said he was focusing on ensuring that he repairs his ‘gun’ (his voice) which he needs to use in his fight. The President urged Ugandans to always call medical authorities for check-ups from their homes instead of going to a clinic for self-medication.

The President cited the two cases of Uganda’s COVID-19 deaths in Namisindwa and Mengo and said if help was sought from a designated medical hub, the deaths could have been avaoid. “Please if you wanted to see death, you have now seen it. If you don’t listen, the worst will come” the President warned. He revealed that Uganda may get a vaccine or even the treatment very soon because the scientists are working tirelessly, adding that what the country is doing now is to avoid the disease. President Museveni cautioned that some people are mixing up issues of fighting Corona Virus with business, money or jobs where as the issue at hand is between life and death.

He cited the issue of Boda boda riders whose lockdown was due to be lifted on the 27th but had completely abused the health guidelines. “We want life. Some countries, which did not care about the Virus, are suffering and losing lives. Until recently in Namisindwa and Mengo Kisenyi, we had no Corona death. But even the two death cases are as a result of not listening to our messages and guidelines,” he said. Despite Corona Virus,

Mr. Museveni said that Uganda is strong even after closing boarders, airports, tourism etc. because the Ugandan shilling is gaining against the US Dollar. “We have not collapsed and we are moving. We have a lot of sugar, milk, and bananas etc. despite the global pandemic,” he said. In the NRM manifesto, the President said they are going to give a detailed plan of deepening modernisation by looking into and considering the internal distribution of wealth.

He gave an example of the 2.6b litters of milk that Uganda produces but only consumes 800m litters and says that the surplus is artificial. “What is called surplus is not surplus because people are not consuming the rightful quantities. For example in 1986 Ugandans were drinking 18litters of milk per person per year and now 60litters although the world health organisation recommends 200litters per person per year,” he said. Mr. Museveni said that the solution for this surplus would be strengthening regional integration and market integration of East Africa in particular and Africa in general. “We need to address the issue of East African Integration,” he said. On the issue of Export Promotion, the president said that apart from coffee, Uganda is stuck with almost everything including sugar, milk, bananas etc. saying this is part of the reason why we need to strengthen regional and market integration.

The NRM National Chairman, commended the Party’s Electoral commission for performing their mission and the NRM Central Executive committee for coming to give him moral support. The NRM deputy Secretary General Hon. Richard Todwong who congratulated President Museveni on getting nominated, thanked him for accepting the call to continue with his wise leadership. “The journey you started cannot be wished away and we still need you, your skills and experience to steer this country forward,” Todwong said. Todwong revealed that many local political parties are struggling and grumbling because of their internal problems and divisions but the NRM is stronger than before because of President Museveni’s steady leadership.

The NRM Electoral Commission Chairperson Mr. Tanga Odoi said that as the commission, they are forwarding the nominated candidate to CEC and NEC for further management. He reiterated that no one was barred from expressing interest in any position. Present at the function were the NRM National Vice Chairperson, Alhaji Moses Kigongo, Speaker of Parliament the Rt. Hon. Rebecca Alitwala Kadaga, Prime Minister Ruhakana Rugunda, Chief whip Ruth Nankabirwa and NRM treasurer Rose Namayanja. Others included party representatives right from the grassroots at all levels.