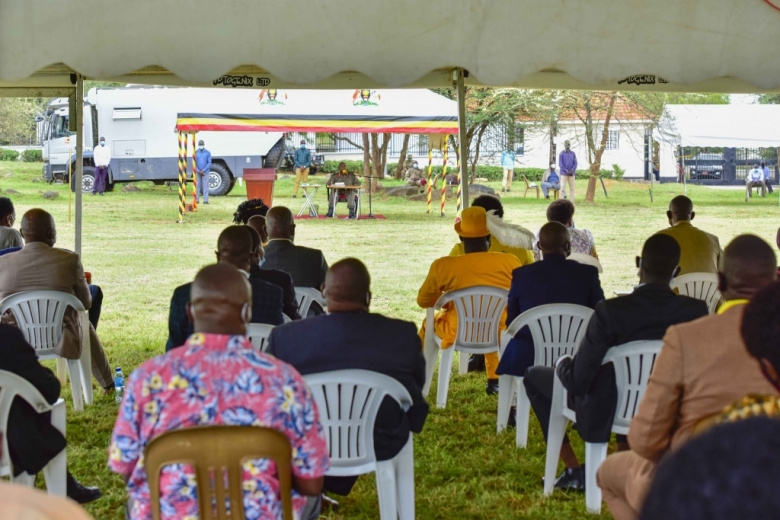 President Yoweri Kaguta Museveni has appealed to leaders in the Karamoja sub-region to form kraal intelligence units as it emerged that criminal alliances among clans are using mobile phones to mobilise and raid cattle which they then sell to buy guns and terrorize their communities.

He called on them to recruit informers in kraals who will give information to security to respond immediately and fast.

“What I want is Kraal based intelligence. I need an informer per kraal. Our army has the capacity to reach anywhere day or night in one hour. We shall provide small phones to the informers to call security contacts,” President Museveni said amidst approval from the leaders.

The President is in Karamoja sub-region to assess various issues affecting the region especially the re-emerging insecurity occasioned by youth criminal alliances among Jie, Matheniko, Bokora and Pien  clans who attack their own communities, steal cattle and keep them in kraals before selling them off in exchange for guns. They also stage ambushes especially along Kaabong-Kotido route to steal from their communities.

The President said that government will restore sanity in the region especially through fighting criminality because it has a big capacity than before when they started the disarmament process.

“All these insecurities are easy to solve and UPDF will solve them. What will remain now is crime, which police must come in to resolve, ” President Museveni said.

The meeting was attended by the 26 MPs from the 9 districts of Karamoja, all the 9 RDCs, LCV chairpersons and all the security heads in the region.

President Museveni observed that the problem in the region is characterized by five issues including; Cattle raids, road ambushes, attacking homes, taking cattle on vehicles for sell and hunger.

“The main problem is insecurity and hunger. With raiding cattle, anybody who raids cows should be seen by our security drones especially when they are raiding on a big scale,” he said.

Gen. Museveni promised to increase the capacity of the brigade in the area up to a total of 70,000 personnel.

“We are going to increase the capacity of UPDF in the area. I want the police to come in and tackle crime like stealing one cow, murder etc. Police must organize themselves to go up to the sub-country level,” he said.

President Museveni agreed to strengthen the justice system in the region by adding more State Attorneys as requested by the leaders.

“I agree that the system of justice is very crucial. When people’s goods are stolen and they don’t recover their properties or get compensation they get demoralized. We shall have to strengthen the system,” he said.

According to the President, the strategy now is stopping the crime immediately.

On the issue of hunger, the President pledged to talk to the Prime Minister to get food for the people of Karamoja who are suffering with hunger.

“I will inform the Prime minister to get food so that our people can survive,” he said.

The President commended the Ministry of Karamoja for the development projects in the area and said government will do even more.

“Am happy with the report from the Ministry of Karamoja, because these were our first priorities i.e. water, roads, education, health and agriculture (quick maturing crops),” he said.

He said the security roads in Karamoja sub-region will be improved on to enable the army move swiftly and fast when a call arises.

The Minister in charge of Karamoja affairs Hon. Dr. Mary Gorette Kitutu highlighted key areas of intervention by government and other development projects in the area that include; water production, education, infrastructure, health etc.

“A total of 116 valley tanks have been constructed in Karamoja. In addition, we maintained five valley dams. We have also done a lot of community empowerment as a strategy of fighting poverty at household levels.” Minister Kitutu said.

Minister Kitutu commended the President and First Lady for their tireless efforts to secure and develop Karamoja region said, that they have and will continue to have fruitful discussions in ensuring that total peace and development is achieved in Karamoja.

In a memorandum by the leaders read by the Chairperson of Karamoja Parliamentary group also Member of Parliament for Pian County,  MP Hon. Remigio Achia said the region has became an investment destination for many Ugandans and foreigners after the removal of over 40,000 illegal guns from the hands of civilians by the army but added that the unattended to issues in Karamoja have resurrected the insecurity.

“The cumulative effect of unattended conflict situations brought the insecurity to the stage Karamoja is experiencing now. Some elements in some communities are taking the law into their own hands and criminals interpreting slow response as lack of government willingness to deal decisively with it,” Hon. Remigio said.

They called on government to initiate a 10 – 15 year free education programme for all youth from Primary to Secondary education to stop their recruitment and training into cattle raids.