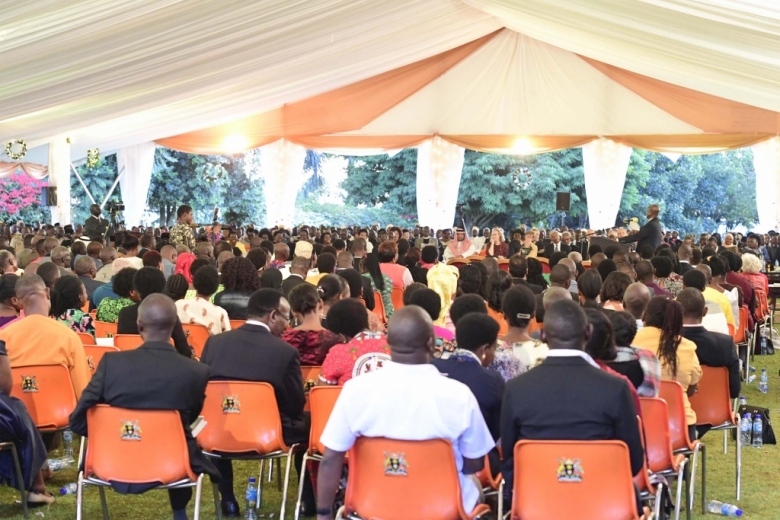 We held the National Thanksgiving Service at State House Entebbe. Mama Janet Kataaha Museveni and I are honored to have hosted this important event.

I thank the inter-religious council, religious leaders from the different denominations and everyone who was present both physically and spiritually as we continued to dedicate this country and thank God for the far he has brought us as a nation.

It is good to thank for the Bible says (In Luke 17:15-18): “And one of them, when he saw that he was healed returned, and with a loud voice glorified God, and fell down on his face at His feet, giving Him thanks. So Jesus answered and said: “Were there not ten cleansed? But where are the nine? Were there not any found who returned to give Glory to God?

We are that 10th leper who returned to give thanks. This event gathered all the different religious groups, when I saw all of them here, I got the exact feeling that God is with us here, God loves this country.

However, intoxication in religion should not end at intercession, prayer, and fasting, but should translate into development, just as God wants.

The big problem in Africa has been a spiritual problem. Africa is a rich continent that has lagged behind in development. Development is a biblical commandment if you are Christians. Other religions also teach about that.

In the book of Genesis, it is clear that man was created in God’s image hence we are not like other creatures, also in the same book, we are supposed to multiply and fill the earth (Ugandans do this very well and we have not so much argument here), but we must also establish dominion over nature, we must develop.

What Africa does is multiplying and filling the earth, the other of establishing dominion, we have not done. Africa has been asleep, that is why you find Europeans with just one season, producing much more than us who have two seasons.

Now, this is sleeping, Basoga call it Kulambaala, actually, there is also a village there (In Busoga, Iganga) called Lambaala.

I am glad that the National Resistance Movement has ensured to provide a favorable condition to support development. First we chose peace, by building a disciplined army. We were against the idea that a soldier should be mad and feared for it.

A soldier should be disciplined than ordinary people because the latter are not disciplined. In other parts of Africa, you find the UN guarding the people, then we said what sort of people are you that can not guard yourselves? We said we shall not let that happen, the UN will not guard Uganda. We established a resistance against the idea of a crazy army and a defense system that relies on foreign capacity.

On under development, we said let everyone go to school first, yes people are talking about many youths who are not employed but they are educated. Why are they educated? Because they have been educated. Now we have a new problem with educated children but some of them are learning things that are not relevant. But they are educated, which solves our initial problem, because prior, our children were neither educated nor employed. This is half the struggle.

We also had the question of not producing, even those with land were not producing, everything was being imported. But now we are awakening people and you can hear farmers crying of too much maize, milk, and reduction of prices on different items. This is good, it is a bit of waking up. This waking up however means we should look for market in East Africa, Africa and beyond just in case everybody wakes up.

I congratulate those families that have woken up already to engage in Agriculture, industry, service, and ICT, I encourage them.