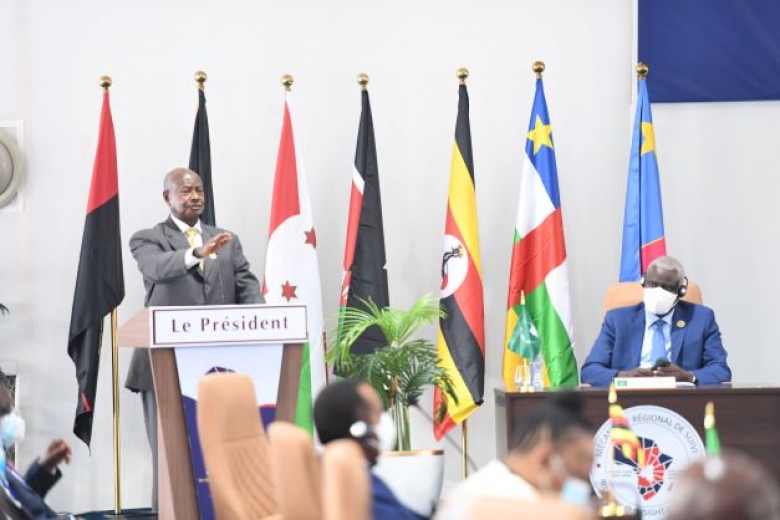 President Yoweri Museveni has said that the Regional Oversight Mechanism of the Peace, Security, and Cooperation Framework has not worked well to deal with the growing security threats in the great lakes region.

"I want to inform you that the mechanism has not worked well for 4 reasons," Museveni said, identifying the four (4) reasons as being; the imported pseudo ideology of exclusion and sectarianism, handling of security in the region, lack of cooperation, poor infrastructure and lack of social economic transformation among others.
The President was addressing the 10th Heads of State Summit of the Regional Oversight Mechanism of the Addis Ababa Framework Agreement in the Democratic Republic of Congo’s Capital Kinshasa. President Museveni, who took pride in being among one of the most indigenous groups in the Great Lakes, termed as ‘ideological bankruptcy’ the thinking that the groups causing insecurity in the region don't belong here.
"In the great lakes, we know the people who live there since time immemorial. The ones who live in the grasslands, in the mountains and forest regions, but some have been promoting a pseudo ideology of exclusion. This is what caused big problems in Rwanda and Burundi and other parts.

Museveni who is also the outgoing chairman of the Summit, said this has led to mishandling of security issues causing suffering and displacements
"We are very rich in refugees. We (Uganda) have got 1.7 million refugees. These refugees are not coming from the moon but from the Great Lakes Region, caused by insecurity and attacks by criminal groups," Museveni said.

According to Museveni however, the groups causing insecurity in the Great Lakes Region can all be defeated from what he has observed in the last 60 years.

"This problem of insecurity in Africa which is becoming bigger and bigger can be defeated. Our elders like Mwalimu Nyerere (Tanzania), Kenneth Kaunda (Zambia) and others with friendly fighters from Angola, Mozambique, South Africa, Zimbabwe, defeated bigger problems. We were able to defeat the Whites in Southern Africa and Namibia. How can we fail to defeat these reluctant groups? That means there's something that is missing which our elders did and we're not doing," Museveni said, adding, “that there's now more capacity than Tanzania, Botswana and Zambia had in 1974 when the African armies defeated the Portuguese Army in Africa.
The President saluted President Felix Tshisekedi of the DRC for cooperating to eliminate the rebels of Allied Democratic Forces - ADF
"I can tell you, if we cooperate, there's no security problem we cannot defeat in Africa. I'm telling you this because I know it," Museveni stressed.

At the same summit, Uganda’s President Museveni handed over chairmanship of the Mechanism to the Democratic Republic of Congo’s Felix Tshisekedi Tshilombo.

Tshisekedi saluted President Museveni and that of Rwanda Paul Kagame for the successful reopening of Katuna-Gatuna border for the smooth flow of business in the region.

The two-day meeting at State House Kinshasa, attracted Heads of State and representatives from the 13 countries under the Great Lakes Region including Burundi, the Democratic Republic of the Congo, Congo Brazzaville, Ethiopia, Gabon, South Africa, Kenya, Malawi, Mozambique, Rwanda, Zambia, Tanzania, and Uganda.
In attendance were among others; Republic of Congo Brazzaville President Denis Sassou-Nguesso, Ali Bongo Odimba (Gabon)
President of Angola Jose Eduardos Santos, that of South Africa Cyril Ramaphosa, Évariste Ndayishimiye of Burundi and Jean-Pierre Lacroix - UN Under secretary on Peace operations.
The Regional Oversight Mechanism of the Peace, Security, and Cooperation Framework is a structure formed with a determination to end the cycles of conflict and violence that had characterized Africa’s Great Lakes region.