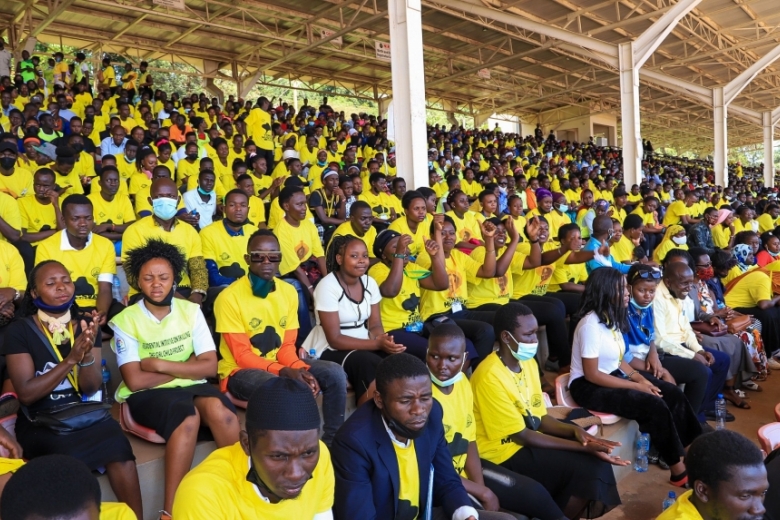 President Yoweri Kaguta Museveni has urged the youth to use their powers given to them by the National Resistance movement (NRM) to fight corruption in Uganda.

Speaking to the over 10,000 youths including professionals at the Patriotism for Youth & Investment Symposium held at Kololo Ceremonial Grounds on Saturday under the theme: “Patriotism for social-economic transformation”, the President said the NRM from the onset, was very clear about the problem of corruption and put in place measures to fight it; part of which, the democratization process that gave people the mandate to elect leaders they trust despite the presence of those appointed by government like sub county/Gombolola Chiefs.

“I did this because I knew what was happening in the colonial times. I wanted the people to have their own voice by electing their leaders right from Local council (LC) I, LC. II, LC. III and Members of Parliament. Why should things go wrong in your areas when all these leaders are there and you just keep quiet,” Museveni said, before blaming the youth for failing to exercise their rights to follow up on the money sent in their areas to benefit them.

He gave an example of the 100 million shillings sent to parishes to support citizens under the Parish development Model (PDM).

“You have to fight corruption wherever you are because you know we have sent money to your parishes. Go there and see what’s happening with your money. This is your money. Fight for your portion,” Gen Museveni said, adding that the youth should use their leaders to provide accountability of the resources from the government.

According to President Museveni, corruption worsens poverty and aggravates inequality as resources meant for the poor and the underprivileged are diverted to line the pockets of the corrupt, thus hindering “Prosperity for all” which is part of the 3 core historic missions the NRM government has been preaching since 1986.

“That’s why while some people say others should be educated and others not, for us (NRM) we say education for all, Immunization for all, and now you can see the results,” H.E Museveni noted. He added that when NRM came to power, the population of Uganda was 14 million Ugandans but now they are 43 million “because we immunized all the children”.

The President has demonstrated high level of commitment in the fight against corruption through different policies and establishment of government agencies to deal with reported corruption, including the Inspectorate of Government (IG), the Office of the Auditor General (OAG), the Directorate for Public Prosecution (DPP), the Directorate for Ethics and Integrity (DEI), the Anti-Corruption Court, and the State House Anti-Corruption Unit.

At the same function, the President cautioned the youth to take their lives seriously in face of the HIV/AIDS disease that is killing 17,000 Ugandans every year according to health reports.

“And that’s why I would appeal to you to now watch out for AIDS because that is now your individual choice,” President Museveni said.

Gen Museveni further informed the youth that in order to achieve prosperity for all, all the four (4) principles of NRM have to be taken seriously. They include; Patriotism (love Uganda), Pan Africanism (love Africa) to enable international cooperation for trade (emikago) but based on the strength of a United Africa, Socio-Economic Transformation and Democracy.

On patriotism, the core principle and topic of the day, President Museveni cautioned youth on emphasizing tribes and religion which will not help them especially when they produce goods and need markets.

Gen Museveni who described himself as a matooke farmer and renowned producer of milk in Ankole, noted that without other tribes buying his produce (milk and matooke), he would not have gone to school. He said two men from Buganda namely; Walusimbi and Bukenya who bought matooke and cattle from their family helped him go to school because the Banyankore (People from Ankole region) were not buying from them because they too were on the same production line of farming matooke, rearing cattle and producing milk.

“This also happens to other regions like Buganda, Acholi, Teso. So, if you talk of tribes and religion, you’re fragmenting your market,” – H.E Museveni said, adding that the NRM government saw this mess at the beginning and rejected it because it was hindering prosperity and social economic transformation.

He further called upon Ugandans to engage in the four sectors of wealth creation which include; commercial agriculture with ekibalo (calculation) through the 4 acres Model of farming, manufacturing, services (transport, hotels, music etc) and Information Communication Technology - ICT.

Gen Museveni assured the youth and the nation at large that the government is in control and nobody will destabilize the peace of Uganda.

“That is day dreaming. There will be no instability in Uganda. The issue of the elections will come at the right time. I want you to concentrate on what we’re saying here (how to achieve prosperity for all),” he noted.

Ms. Hellen Sseku, the Private Secretary for Youth Affairs in the Office of the President, on behalf of the young patriots thanked the President for creating an enabling investment environment that has attracted thousands of investors to Uganda who have provided jobs to the young people.

The Minister of state for Investment and Privatization, Hon Evelyn Anite said the function was also meant to celebrate the investors in this country that have made Uganda to be among the top 10 investment destinations in Africa.

At the same event, the top 50 exceptional and responsible investors were awarded for contributing to securing the future of this country and the people of Uganda.

Minister Anite further thanked President Museveni for maintaining peace and security and promised him more support from the young people.

Among the professionals who attended the function were doctors. They commended President Museveni for enhancing the salaries of health workers and equipping all the regional referral hospitals with Computed Tomography (CT) Scans.

Through their leader Dr. Samuel Odongo Oledo, doctors under their umbrella body- Uganda Medical Association (UMA) called upon the government to recruit more specialized doctors in these hospitals to improve quality of health care.

The event organized by Young Patriots, Friends and fans of President Yoweri Kaguta Museveni was characterized by fanfare and entertainment from schools and musicians such as Joseph Mayanja famously known as Dr Jose Chameleone.