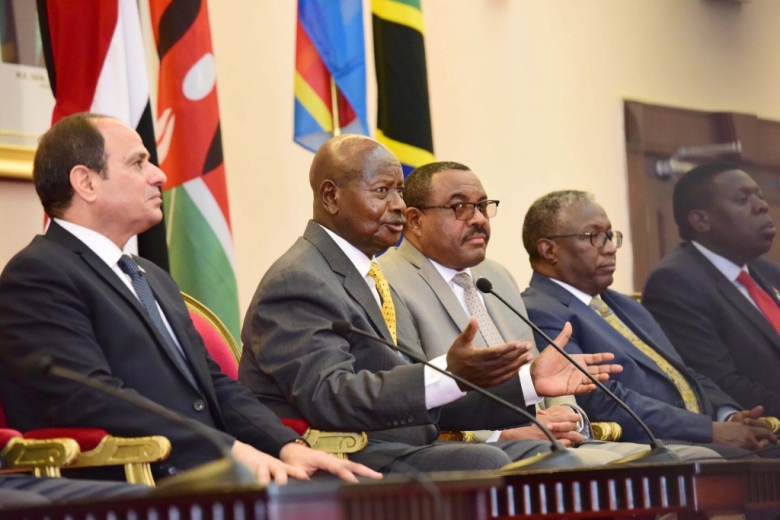 Prosperity for Nile Basin countries is the best way to protect River Nile and other water systems in Africa, President Museveni has said.

The President made the remarks at a plenary session of the first ever Nile Basin Heads of State summit held at State House, Entebbe.

Addressing the summit, President Museveni pointed out five key threats to the River Nile and other rivers.

“The first is the growing population of Africa, the lack of electricity especially in the Tropics, lack of industrialization, reliance on primitive agriculture and destruction of environment upon which the Nile depends,” he said.

About population, President Museveni said the problem was not size but its quality.

“Africa is almost 12 million square miles, which means it is 12 times the size of India or four times the size of China. Yet these countries have been having bigger populations than Africa until recently,” he said.

The problem therefore, he said, is the pre-industrialist and pre-capitalist characteristic of the population.

Alluding to China, President Museveni noted that improving the population quality; turning people into scientists, enterpreneurs and consumers, would make the population an asset.

On the question of electricity, President Museveni, observed that its consumption was still low in Africa.

He added that abundant and cheap electricity would mean development and subsequently tackling the problem of limited industrialization in the Nile Basin.

Industrialising the Nile Basin would in return resolve the problem of a bulk of the population engaging in primitive agriculture—pushing them into industry and service sectors, said President Museveni.

“As far as agriculture is concerned, much less numbers are needed there to achieve maximum output. Most of the people in agriculture are in disguised unemployment. They end up putting pressure on forests, mountain ranges and wetlands,” said President Museveni.

Because of low yields, the President said, the population keeps searching for more land to till. This challenge, he added, could be solved through employment of technology.

Citing the Presidential Initiative on Bananas project in Bushenyi, where a hectare of land yields 53 tonnes of bananas as opposed to the average 5.3 tonnes on ordinary gardens, the President said scientific advancement would help resolve the question of low output.

Increasing electricity in Nile Basin countries, therefore, will make industrialization possible, and push the bulk of the population to industry, ICT and the services sector.

This shift, observed President Museveni, would also reduce the strain on the environment, which is damaged in two major ways; invasion of wetlands and destruction of forests.

Wetlands, said President Museveni, are actually tributaries of the Nile that account for 40% of the rainfall. He tasked scientists to explore the effect of wetlands destruction on the other 60% rainfall that comes from the Pacific and Indian oceans.

Expressing his delight at the congregation of the first ever Nile Basin Heads of State summit, President Museveni challenged other leaders present to work for the social transformation of their people as the ultimate guarantor of the Nile’s security.

“All Nile Valley countries should be assisted to develop and become first world countries. It is why we called this strategic conference,” he said.

President Museveni warned that approaching issues of the River Nile from a parochial point would defeat the wider interest of the basin countries, urging that discussion should be at strategic levels.

“If you start from the parochial point of what Uganda alone stands to benefit without knowing that Uganda’s prosperity depends on others, then you will lose out,” said the President.

The discussion, said the President, would also be meaningless if the question of what is important between human and natural resource is not addressed.

“My view is that human resource is more important. Japan, China and South Korea do not have a lot of natural resources but have a large human resource and all of them have among the highest GDP in the world,” he said, adding: “Have we then thought of how to use our 500 million people in the Nile Valley to benefit our region?”