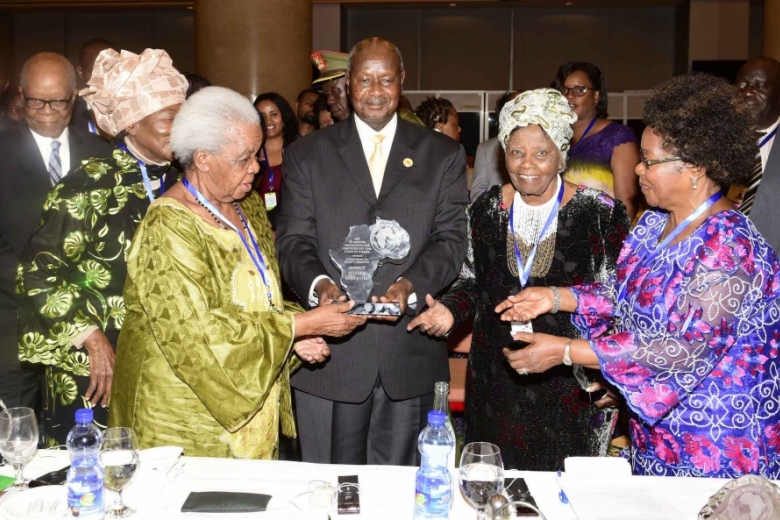 ADDIS ABABA. Africa should continue to honour and celebrate the women who made a significant contribution towards the continent’s liberation, President Museveni has said.

The President made the remarks on Sunday evening as he presided over the re-launch of the Pan African Women Organisation’s (PAWO) East Africa Chapter at the Multi-Purpose Hall in the African Union Complex in Addis Ababa, Ethiopia.

The event, held on the sidelines of the 30th Africa Union Heads of State Summit, saw several female icons of the African anti-colonial struggle recognized and honoured.

Those present at the function were Maria Nyerere, Miria Obote, Joyce Mpanga, Phoebe Asio and Muthoni Likimani. For Joyce Mujuru, Rebecca Mulira and Hellen Faith Nkrumah, their awards were picked by their family members.

Juxtaposing with the practice in the army, President Museveni said recognizing the women was similar to the army honouring its veterans.

“We soldiers insist on bravery. If you are a commander, you make sure your soldiers are brave. However, one way of undermining bravery in the army is to neglect veterans,” President Museveni said. “When you ignore veterans and do not look after them and their families, the soldiers become cowards. They ask, what will happen to my family when I die?”

President Museveni commended the organisers for the function, saying they were consolidating the spirit of Pan-Africanism by remembering the “mothers of our struggle”.

The President also used the occasion to pay tribute to Mwalimu Julius Nyerere, who led Tanganyika to independence, saying he not only organized the inaugural PAWO meeting but also supported liberation movements in southern Africa.

“It was Tanzania, Botswana and Zambia which were the first three frontline states. They were later joined by Mozambique, Angola and Zimbabwe,” said Mr Museveni. “I am glad that Mama Maria Nyerere is here to see that Mwalimu and his colleagues; Kenneth Kaunda, Seretse Khama, Augustino Neto, Robert Mugabe, have not been forgotten by Africa.”

About Mpanga, Likimani and Mulira, President Museveni saluted them for pioneering education, saying it helped break barriers to emancipation of African women.

“How was the African woman to cope with the modern world if uneducated? These set the path for the younger ladies in education. And they just did not go to school, they improved the social conditions of their people,” said the President.

On Miria Obote and Mama Nyerere, President Museveni said: “These mothers and elder sisters were reliable companions of our elders who led the freedom struggle. If you do not have reliable partners, this can affect your struggle.”

President Museveni also noted that some of the women like Joyce Mujuru had been directly involved in combat during the struggle, noting that they had demystified the notion that women were only meant to cook.

Responding to concerns raised by the PAWO president, Assetou Koite, on the socio-economic empowerment of women, President Museveni said Uganda had already initiated programmes to this effect.

“We are working on these things. For example Uganda has handled the question of matrimonial property. We passed a law saying a husband cannot sell matrimonial property without the consent of the wife,” said the President, who was also given a plaque by the women Pan-Africanists, in appreciation for his support to their cause and Africa’s liberation.

Mrs Koite had also thanked President Museveni for supporting the organization and told the gathering that they had presence in the five sub-regions of Africa, with the East African Chapter, to be housed in Kampala and serve 14 countries, as the latest addition.

Grace Kabayo, a Senior Presidential Adviser on Pan-Africanism, is the executive secretary of the PAWO Eastern Africa chapter, overseeing the organisation’s day-to-day activities.

Side Bar
After receiving her award, Mrs Muthoni Likimani, 92, a renowned Kenyan activist and writer, challenged African governments to put an end to the emerging scourge of slavery. “We can be too excited and forget some important things like human trafficking. Slave trade has come back. Africans who are independent are being auctioned like cows. We must do something. We must stop it.