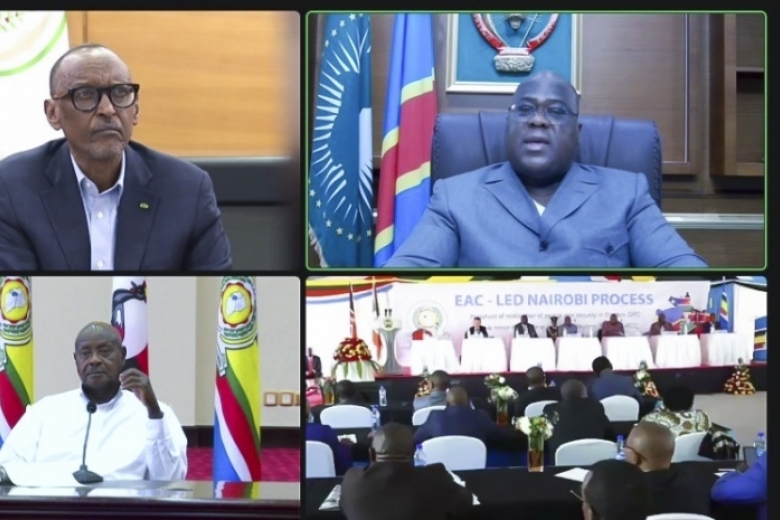 President Yoweri Kaguta Museveni believes the insecurity in the Eastern Democratic Republic of Congo (DRC) has to a larger extent been perpetuated by the presence of illegal guns that have been circulating within the country since independence.

While addressing leaders of the East African Community (EAC) virtually during the EAC-Led Nairobi Process, on restoration of peace and security in Eastern Democratic Republic of Congo - Third Inter-Congolese dialogue that took place in Nairobi, Kenya, Gen Museveni informed fellow leaders that many illegal guns still in the hands of foreign and local armed groups are an impediment to lasting peace in the eastern part of DRC and the entire region.

“The main problem are the illegal guns in Congo. These illegal guns have been there almost continuously since Congo’s independence,” H.E Museveni said, adding that the guns currently being held by foreign armed groups like the Allied Democratic Forces-ADF from Uganda, the Entarahamwe of Rwanda and other groups from Burundi and Angola plus the internal Congolese groups such as the Kodeko, M23, Maimai and others have all these years been killing Congolese and disturbing neighbours.

Speaking from experience, President Museveni noted that the internal groups of Congo that came from the weakening of the state authority of that area (Eastern DRC) for a prolonged period, can be handled by combining the political methods that is to say; dialogue and if necessary, the military method if there’s any group that is adamant and doesn’t want peace.

“The political means start with the dialogue. The dialogue should be preceded by a ceasefire where there’s active fighting and disengagement of forces. The peaceful solution should be the outcome of the dialogue,” he said.

The President further called for harmonised efforts to bring lasting peace in the region.

“These armed groups causing insecurity can be defeated if we harmonise efforts. If any Congolese group doesn’t respect the formula reached after the dialogues, the combined resources of East Africa will be brought down on them. No force can defy the combined efforts of east Africa,” Gen Museveni stressed.

The President commended the efforts made by Operation Shujaa in the Eastern DRC which has been going on for almost a year now conducted by the combined forces of Congo and Uganda.

“These efforts in North Kivu and Ituri, have shown that we have the capacity to deal with these groups in spite of the difficult terrain, the forests and so on. If the Congolese government agrees, they can invite visitors and visit where we are operating and see what can be achieved,” H.E Museveni added.

However, according to the President the victim communities and the refugees who reside in the areas that have been occupied by terrorists for all this time should not be left out in efforts to pacify the region.

He said the Congolese communities such as the Bakonjos-banande of Uganda and Congo, the Bahema-banyoro, the Alurs, Lugbaras and Kakwas in Congo and some parts of West Nile in Uganda, the Bamba, the Banyarwanda of Kinyarwanda speaking people in Congo, Rwanda and Uganda are the same and know each other.

“Those people have been suffering and should be consulted because their land has been occupied by these terrorists for all this time. This is not fair. Here in Uganda, we have got 480,000 refugees,” H.E Museveni said, adding that with 1.6 million refugees, Uganda now is the richest country in refugees in Africa and is number 4 in the whole world in the wealth of refugees, something he said “is not fair and not necessary.”

The third Inter-Congolese dialogue of the Nairobi Peace Process is aimed at accelerating the ongoing regional efforts to attain sustainable peace and security in Eastern DRC.

H.E Museveni informed the dialogue that Uganda remains committed to a quick and permanent solution to the conflict in the Eastern Democratic Republic of Congo.

The President of the affected nation of the DRC, H.E Félix Antoine Tshisekedi Tshilombo who addressed the dialogue virtually, said his country is committed to support the efforts of the EAC member states to end insecurity.

“The time to change the narrative of DRC having protracted insecurity is now! We are committed to the EAC- Led Nairobi Process and long for peace, so we can rebuild the great Democratic Republic of Congo,” the DRC President said.

The President of the Republic of Burundi who is also the current Chairperson of the East African Community, H.E Evariste Ndahishimiye also called upon leaders to step up efforts to bring peace in the region.

“We are cognizant of the high expectations the region & international community has in this process. I am appealing to all Partners to commit to supporting initiatives aimed at promoting peace and consolidating stability in the region,” he said.

This was re-echoed by the lead facilitator of the EAC - Led Nairobi Process H.E Uhuru Kenyatta, the former President of Kenya.

The President of Kenya H.E William Ruto said the pursuit of peace is an inevitable precondition for the prosperity of East Africa and re-affirmed Kenya’s commitment in supporting the restoration of peace in Eastern DRC.

The President of Rwanda H.E Paul Kagame who also attended virtually welcomed the swift response in seeking to restore peace in Eastern DRC, saying Rwanda is committed to the process of addressing the root cause of insecurity in Eastern DRC once and for all.

Also joining virtually were representatives from the Government of the United Republic of Tanzania & Republic of South Sudan. Further in attendance were observers from the African Union, United Nations, and invited members of the Diplomatic Corps.

The Special Envoy of the UN Secretary General to the Great Lakes region, H.E Huang Xia was also physically in attendance.

According to the East African Community secretariat, the Inter-Congolese dialogue has been re-energized and incorporates consultations amongst armed groups in Eastern DRC, local community leaders, civil society and other relevant stakeholders, with the aim of finding sustainable solutions to the protracted security situation.

The Inter-Congolese dialogue will run up to 3rd December and involve consultations amongst armed groups in Eastern DRC, local community leaders, civil society and other relevant stakeholders, with the aim of finding sustainable solutions to the security situation.