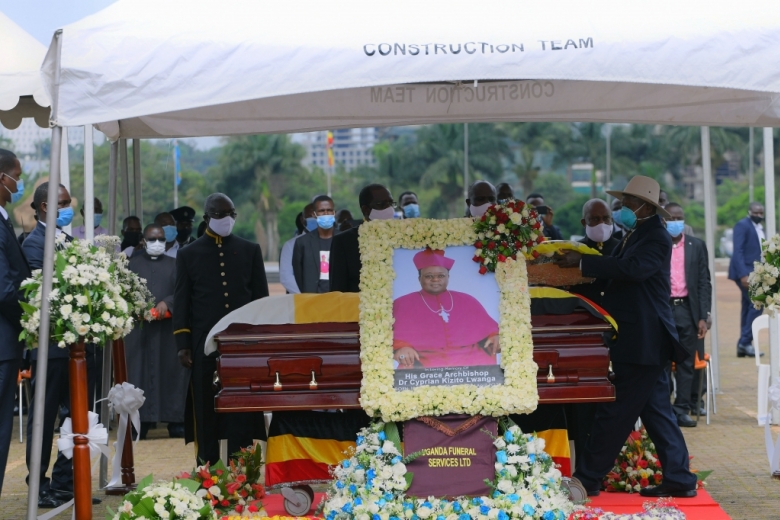 The president was speaking during a state funeral and mass for the Archbishop who succumbed to Ischemic heart disease following coronary heart thrombosis, according to a post-mortem report from Mulago national referral hospital. Archbishop Lwanga was found dead in his room on Saturday morning.

Speaking to a congregation comprising Ministers, government officials, and clergy at Kololo Airstrip on Tuesday, President Museveni said he ordered for the state mourning of Archbishop Lwanga because of his importance to the nation as a distinguished leader.

The President said he ordered the official mourning for our brother the late Lwanga for a number of reasons; 1- Is that he has been an Archbishop, we do not have many of those, they are only four for the Catholic Church; North (Archbishop John Baptist Odama, East (Emmanuel Obbo) West (Lambert Bainomugisha) and Kampala where Lwanga has been.

“There are many members who fall in those Archbishop structures. As part of building our national culture it is not only to honor the political and traditional leaders, of course, not all church leaders are national leaders but an Archbishop is one,” he said.

Museveni said the other reason for organizing such a function for Archbishop Lwanga was because of his contribution to the NRA liberation war in 1986 as a sympathizer together with his predecessor Cardinal Emmanuel Kiwanuka Nsubuga.

“(Cyprian) Lwanga was part of our Bayekera sympathizers. We were in bush fighting but we had sympathizers, they did not shoot guns but they prayed for us. They were with Cardinal Nsubuga, Bishop Yokana Mukasa and Muslim leaders like Badru Kakungulu. They were part of our sympathizers,” President Museveni said.

“In Particular Cardinal Nsubuga had two points that we utilized without his official consent, a ranch in Kyankwanzi where we would get medicines from and another big banana plantation in Kiboga. Our guerrillas would go there and get food. Its supply was endless. I never knew exactly where it was and have never gone there or paid compensation, but our guerrillas would come with food and say, we got this from Cardinal’s plantation,” he said.

The president said that while in touch with Cardinal Nsubuga, he met a young Cyprian Kizito Lwanga, then a priest, but he would soon find appreciation in Lwanga’s interest with operation wealth creation.

“When I came from the bush, Cardinal Nsubuga invited me to Kyankwanzi and Kizito Lwanga was there as a young priest, he was always with Nsubuga. One of the things I appreciated about him was his microfinance project called Twekembe which he started with his salary. It is now big microfinance involving many people. I was so happy with him,” the President said.

President Museveni said that Archbishop Lwanga’s actions were enlightening to many Christians who had misunderstood the scriptures in the bible, especially in relation to creating wealth.

“Christians had read the bible wrongly where it said, look at the birds of the air, they neither sow nor harvest but the son of man feeds them. This verse is even worse in Runyankore. We are not the birds in the air, we must look at the parable of talents,” he said.

The president added that now, a number of religious leaders have woken up to follow in the footsteps of Archbishop Lwanga in mobilizing their communities towards operation wealth creation.

The President revealed that Archbishop Lwanga’s death was shocking when he heard it, but insisted doctors did not handle his case satisfactorily.

“It was a shock when I heard that he had died, I inquired then spoke to the police surgeon who was involved in the post-mortem. I think these doctors at a time must start explaining to the audience, I am told the condition that killed him is well known. I asked my Doctor (Diana) Atwine that if the condition is well known, what do you do about it? Although we say that God has called us, I want our people to stay here as long as possible. Doctors should explain in detail some of these things. There is what they call the ECG, it may see muscles of the heart but may not see properly where fats block the heart, there is another machine called Echo which detects such, so I asked why they did not do it,” he added.

The President reiterated that even in this case when Ugandans are mourning a popular and loved person like Archbishop Lwanga, funerals should be organized with health guidelines to avoid putting more people in harm’s way of COVID-19.

“I organized this funeral because here I am in control, I have called few people, I appeal to all people concerned, covid-19 is serious, many people have not been vaccinated and there is a new variant. I appeal to those involved when organizing funerals not to risk more people. It cannot be correct that while you mourn someone you risk more people dying,” he said.

The President called upon the congregation to follow Lwanga’s gospel of love.

Kiyinda-Mityana diocese Bishop Joseph Anthony thanked President Museveni and the government for organizing such an important event for Archbishop Lwanga.

He singled out Museveni who made an initial phone call before anyone, to commiserate with him and the Church.

He said as people of goodwill, we should wash away our tears and pray to God for strength and courage in order to keep moving on our pilgrimage to where Archbishop has gone, met his lord, and received his reward.

President Yoweri Museveni made a donation of Shs 200million towards the burial expenses of the late Archbishop Lwanga. In a condolence message delivered on his behalf by Colonel John Byuma and the Presidents Private Secretary Vincent Musinguzi to the Archbishops family in Kyabakadde, Mukono District, the President consoled the family and urged them to remain strong and united even as they mourn a great leader.