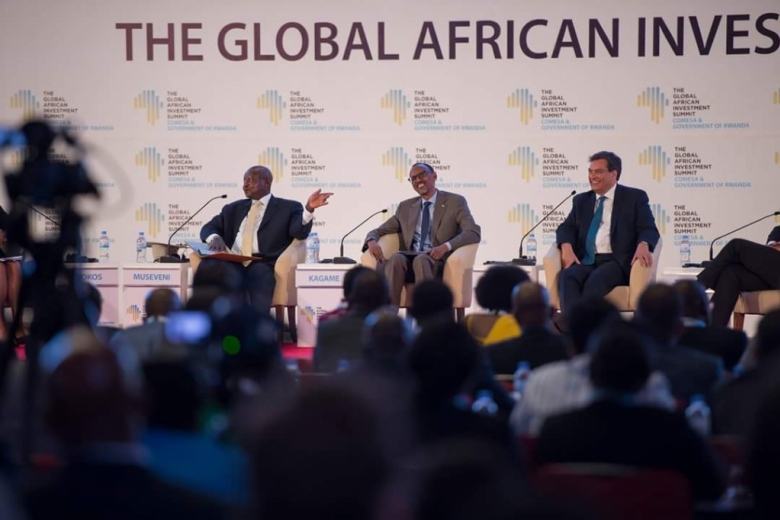 President Yoweri Museveni has described the economic situation in Africa as ‘very good’ saying the continent has experienced high rates of growth despite the bottlenecks like slow infrastructure development (Hardware) and poor methods of work (Software).

“Generally speaking, the situation in Africa is very good. There are high growth rates and many countries have been growing despite bottlenecks both hardware (Roads etc) and software (Methods of work).Freedom of movement of people is a software issue because it is just policy and is being handled,” he said.

The President was today speaking at the 3rd edition of the Global African Investment Summit, the first held in Africa since its inception. Previous conferences were held in the United Kingdom.

During an interactive session moderated by CNNMoney Africa Correspondent Eleni Giukos and attended by host President Paul Kagame, President and CEO of the PTA Bank Admassou Tadesse and the CEO of Symbion Paul Hinks and held under the theme, “Accelerating African Economic Intergration through trade and investment”, President Yoweri Museveni was asked what he would tell investors about Africa.

“I would inform investors that Africa is the right place to come. Africa is the next pusher for the global economy. We have a bit of bottlenecks, which we are handling. There are investment opportunities in electricity sector, value addition for Agriculture products and minerals, human resource development. In Uganda the private sector solved the issue of communication because more people have access to phones in the whole country,” he said. He however warned against greedy investors who charge high tarrifs for quick gains at the expense of the people.

President Museveni said Africa is the next big centre of growth despite forward and backward movements, saying the economic growth is pushing up demand for essentials such as cement and steel.

“Investors forget the logic of business. In business, there are two players, the producer of goods and services and the consumer both linked to infrastructure,” he said.

On the negative media stories about investing in Africa, President Museveni said not all African countries have negative reports. He asked investors to take interest in the situations on the continent and start from where the investment climate is conducive for doing business.

“Why don’t you go to where the story is good and start from there?” he asked. The situation is today improving progressively and the best place to be now as far as business is concerned is Africa,” he said.

President Museveni noted that by Independence few African leaders had not realized that integration was the stimulus for growth. He added that it was not until the 80’s that is when that necessity was realized leading to the formation of regional trading groups.

The host, President Kagame said stability is one of the prerequisites for sustainable economic growth coupled with in people in the area of developing their skills, improving infrastructure and services. He said a lot has been achieved in the East African Community in the integration in many aspects but hoped for fast tracking in many other remaining areas for the good of the people of the region.

President Kagame said progress in any endeavor is about valuing time highly and using it well. He said endless delays are an embarrassment and proposed that there should be a financial penalty of some form if deadlines are not met by public institutions.

He said Africa cannot just remain a story of huge potential that does not materialize.

“Postponing our priorities and delaying our commitments are the most expensive mistakes that Africa can make. Africa should not just remain a big story where nothing materializes. Africa can make it. Lets’ work together as one team across all sectors and borders with the correct mindset for the development of the continent,” he said.

The two-day summit is organized by the Global African Investment COMESA and the Government of Rwanda and is aimed at promoting investment in a various sectors including: education, ICT, development and the economy.

President Museveni who left immediately after the discussion, acknowledged greetings from hundreds of cheering and excited crowds that lined up Kigali streets.

The President who traveled by road from Kabale to Kigali returned home by road and made stop-overs at Katuna Border and in Kabale town centre.

During the abrupt stop-overs where he addressed mini rallies, the President called on the people to fight household poverty through income generating activities. He said government has worked on the infrastructure and the people need to exploit it to improve their incomes. He promised to return and talk to the people about fighting poverty and income generation.