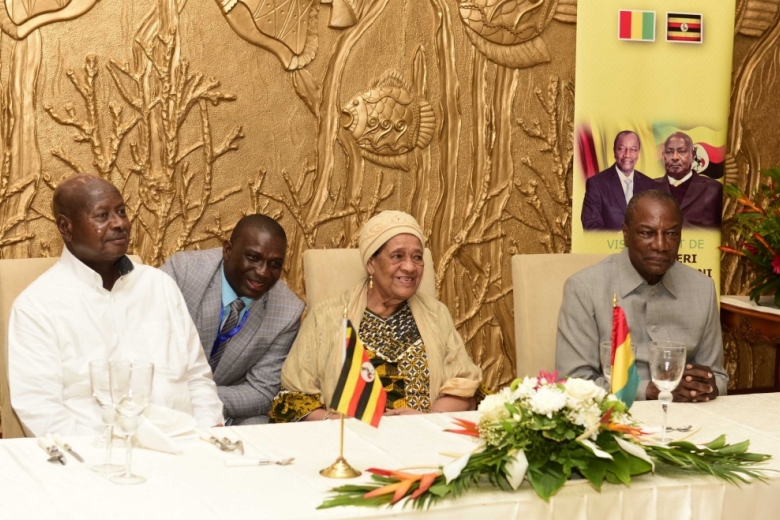 President Yoweri Museveni has called on African leaders to focus on practical issues including promoting trade and services among their people and where possible, use third parties to develop the continents huge resources and reverse and divert its hemorrhage spending abroad to building infrastructure and industries home.

“We must guarantee the prosperity of the African people through trade of goods and services. If I buy what you produce, am supporting your prosperity. That is why our leaders in 1980 through the Lagos plan of action, coupled with ECOWAS, COMESA and the recently signed Continental Free Trade Area (CFTA) is for the prosperity of our people. We do not only buy from one another but also negotiate for third party markets,” he said.

The President said when this is accomplished, including the physical infrastructure to link East-Central-West-Southern Africa, our continent will be united and strong.

The President was last evening speaking shortly before he was hosted to a grand state dinner by President Alpha Conde at State House in Guinea, Conakry. The President was awarded the Highest Order of Merit Award given by Guinea Conakry to distinguished leaders. He was decorated by Hon. Kaba 43, the in-charge of Guinea Medals Board.

“The reason I came here is partly because of the history of Guinea and also the Pan African position of Sékou Touré union with Ghana. Africa must renew its view of political integration alongside economic integration to support prosperity and survival. Unity is strength. All these African people are the same – the Mandingo in Guinea, Mali, seara Leone, the Fulani etc. In our part of the world, the Bantu people are found everywhere. Am very happy to be here. I’ am coming here for pilgrimage because this is the land of Sekou Toure who represented peoples struggles in the support of the independence of the Guinea. They are standing with us and now we are talking about cooperation,” he said.

Touré was a strong champion of African unity and Pan-Africanism. He wasted no time in attempting to strengthen ties with neighbouring and other African countries and thus lessen their collective dependence on former European colonisers. He is reported to have initiated the Guinea-Ghana-Mali Union, a proposal of union between African countries, which preceded the idea of the African Union by 40 years.

His widow Maama Hajia Andre Toure, was at the dinner to witness the award to President Museveni with whom they later sat and had a conversation.

In a passionate plea, the President said the purchasing power of Africans directed towards importing things like human hair, curtains, clothes, carpets etc can be used to build factories on the continent to create jobs for our people.

“I see our children going to Europe and dying at sea. Going to Europe to look for jobs. Jobs that we have been exporting because we are buying other peoples products. That’s is why I came to discuss these issues with H.E Conde, because he is a revolutionary. Africa must unite,” he said.

President Alpha Conde` described Museveni as a pan Africanist President and the first ever Ugandan President to visit Guinea Conakry. He said the medal was also given to re enforce bilateral relationships between Uganda and Guinea.