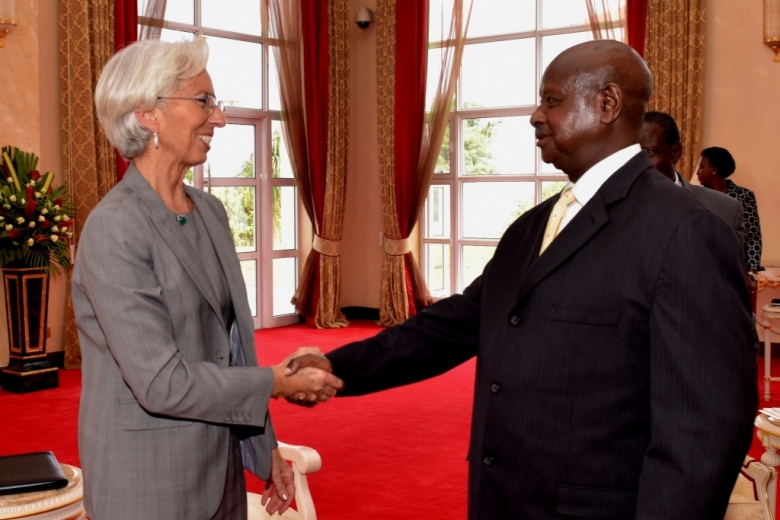 “We need to support the social sector in order to enable economic growth. The cost of transport and money needs to be addressed in order to promote the economy. If you add on the infrastructure, it will boost economic growth,” Mr. Museveni said.

He informed the IMF Managing Director that Uganda has not received sufficient support for infrastructure adding that there has been much concentration on macro- economic stability and control of inflation.

The President told Ms. Lagarde that there are 10 strategic bottlenecks that must be addressed at the same time including the development of the human resource and tackling the issue of small markets. He, however, assured the IMF Managing Director that the question of small markets is being addressed through regional economic blocks such as the East African Community.

President Museveni also informed Ms. Lagarde that apart from the need to empower women through education, there is also the challenge of lifting up the 68% of Uganda’s population who are engaged in subsistence production leaving only 32% of the population engaged in the money economy.

Mr. Museveni told his visitor that the NRM Government has engaged the Army in the campaign to help wananchi be converted into ensuring food security and income generation at household level to fight against household poverty.  He observed that if the 68% of the Uganda population who are not in the money economy are supported, the national economic growth rate would increase from 8% to 13%.

The President stressed that infrastructure development in Uganda today needs support from the IMF adding that the social sector too needs support particularly in the construction of institutional houses for teachers and medical personnel. He expressed happiness that the NRM Government has supported the education sector through the building of several schools at both primary and secondary levels.

President Museveni expressed gratitude for the IMF’s accepting to become an ally in infrastructure development and the building of houses for teachers and medical workers.

On her part, International Monetary Fund Managing Director Christine Lagarde gave assurances that her organization is ready to support the housing proposal. She agreed with President Museveni that supporting Uganda in her efforts to develop the infrastructure is an important aspect of enhancing national development.

Ms. Lagarde also observed that the women of Uganda can contribute enormously towards economic development. She assured President Museveni of the IMF’s commitment to continue supporting Uganda in strengthening the country’s national economy. ENDS