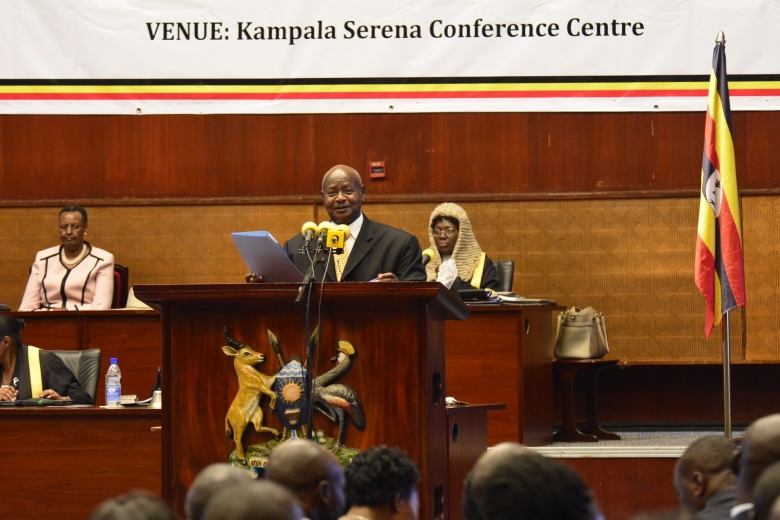 President Yoweri Museveni, in exercise of his constitutional mandate, has presented to Parliament the 2016/2017 National Budget saying its target is the continued strengthening of the economic base of the country in order to transform Uganda into a modern nation in line with the national development plan.

The President told Parliament at Serena Hotel Conference Centre in Kampala this afternoon presided over by Speaker Rebecca Kadaga, that the focus will be put bettering the development infrastructure such as roads, the railway, power generation and ICT development with the aim being lowering the cost of doing business in the country and make Uganda’s economy competitive.

Mr. Museveni, who was accompanied by the 1st Lady, Janet Museveni, noted that Uganda, under the NRM leadership, has already made commendable progress and laid a firm foundation for development by ensuring peace and security which, he emphasized is guaranteed. He added that the country has generated and continues to generate more electricity that is currently in surplus; improved the road network; secured a regional and international markets and improved the ICT network in the country that forms the core for the development of the economy.

He noted that the major infrastructural challenge that is remaining is the development of the standard gauge railway and the capitalization of the Uganda Development Bank to offer cheap loans to industrialists, investors in ICT and the agricultural sector.

The President told the nation that with the majority of the infrastructures now in place, the NRM Government will focus on attracting investment especially in industrial manufacturing, the service sector and ICT in order to increase the country’s export capacity and bridge the current negative balance of trade between Uganda and the rest of her global trading partners.

“We can’t continue to import without exporting and turn our country into a supermarket of other countries.  I am not talking of import substitution but rather you can continue importing but enhance your production capacity and export more,” he added.

The President sounded a strong warning to government officials who are in a culture of frustrating investors and said that government will not tolerate them adding that they will be dealt with decisively. He assured the people of Uganda that the country’s transformation journey will be led only by those who are ‘not corrupt and who are not slow movers but rather the trustworthy citizens.”

“We are competing with other countries for investors and we can’t afford to be slow. We need to tackle those software issues such as corruption, delays, red-tape and duplication of roles in this coming term,” he stressed.

On the national debt, the President assured Ugandans that his government was borrowing cautiously. He reported that the national debt stands at 30% of the GDP and said that government has even abandoned some important projects because of the fear to increase the country’s debt burden.

Presenting the Shs.26 trillion 2016/2016 Budget, on behalf of the President, Buyanja County Member of Parliament in Kibaale district and Minister of Finance designate, Mr. Matia Kasaija, said that the country’s economy growth rate in the last financial year, had grown below the projected at 4.6% which he said was above the Sub-Saharan Region growth rate of 3%.

He attributed it to the fall in the mineral prices, the strong dollar against the Uganda shilling, the slow-down in the economic performance of Uganda’s main economic partner China, and the fall in the prices of the agricultural prices that form the country’s export base.

Mr. Kasaija said that the economy is projected to grow at 5.5 percent next financial year. He announced increased budgeting to the agricultural sector, increased taxation on petroleum and said that the 2016/2017 budget was formulated with the vision of transforming Uganda into a modern country in line with Vision 2040.