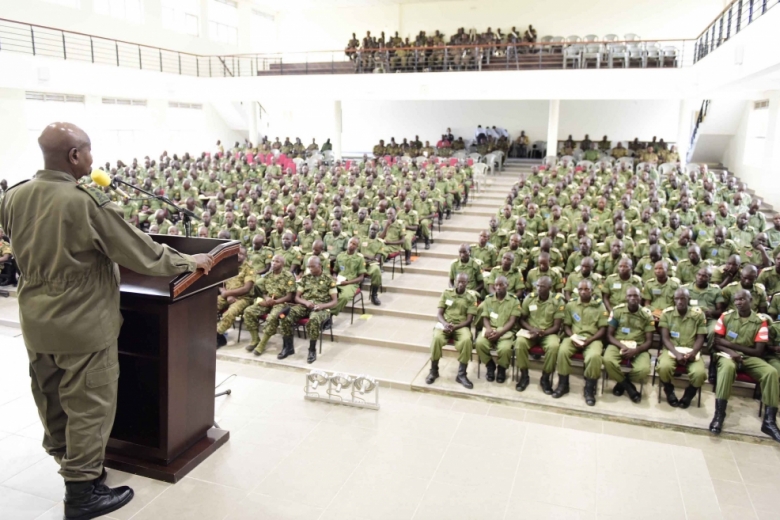 President Yoweri Museveni, who is also Commander-in-Chief of Uganda armed forces, has said that one must make correct diagnosis before he/she can solve a problem.

The President made the remarks yesterday at Kabamba Military School in Mubende district during a lecture  that he presented to Uganda People’s Defence Forces (UPDF) Officer Cadets.

“Managing society is like treating a patient. We must make the correct diagnosis before solving problems. NRM has operated by following 4 main principles namely fighting against sectarianism, promoting patriotism with Pan Africanism, promoting education and practicing democracy,” he said. He informed the Officer Cadets that NRM has persisted in fighting, discouraging and disowning sectarianism of both religion and tribes.

President Museveni called on the students in particular and Ugandans at large to be patriotic and promote Pan Africanism. He reiterated that Uganda must have a society of educated people asserting that our society must undergo transformation. He said that the Ugandan society should shift from a pre-industrial state to an industrial one. He noted that there were 5 main sectors that provide income to wananchi that include commercial farming, industries, services, ICT and Public Service.

He said that the Government has succeeded in promoting democracy. He, therefore, informed the Cadets that though salaries of Public Servants were important, it must be borne in mind that the national economy cannot grow without electricity supply and having good roads, among others. He reminded the students that if the roads and electricity were not provided, the country would collapse. He gave assurances that the Government is fully committed to settling the outstanding debts such as that of veterans. He revealed that in the current financial year, the Government has allocated Shs.102 billion out of Shs.600 billion, towards the Veterans’ debt.

President Museveni, while referring to Operation Wealth Creation programme at household level, said that 68% of the people were engaged in subsistence agriculture. He expressed concern that the traditional, religious and political leadership have been asleep while wananchi experience the poverty pangs. He also stressed the need for people to address the challenge of land fragmentation that he described as an obstacle to development.

While responding to questions from the students, the President said the fight against corruption has been part of NRM’s struggle. He also noted that the Movement has stopped the killing of wananchi and maintained discipline. He revealed that the Government deployed UPDF Officers in NAADS programme and eliminated corruption from that project. He was pleased to note that the battle against corruption was moving well.

Regarding production. President Museveni gave the students examples of the irrigation schemes that have made a big impact in the various parts of the country. He reiterated that the NRM Government is committed to promoting the schemes even further. He called on them to embark on lucrative ventures such as coffee and fruits production because they have a big market. He noted that the consumption of coffee on the international level has increased from 118 million 60 kilograms bags per year to 160 million bags.