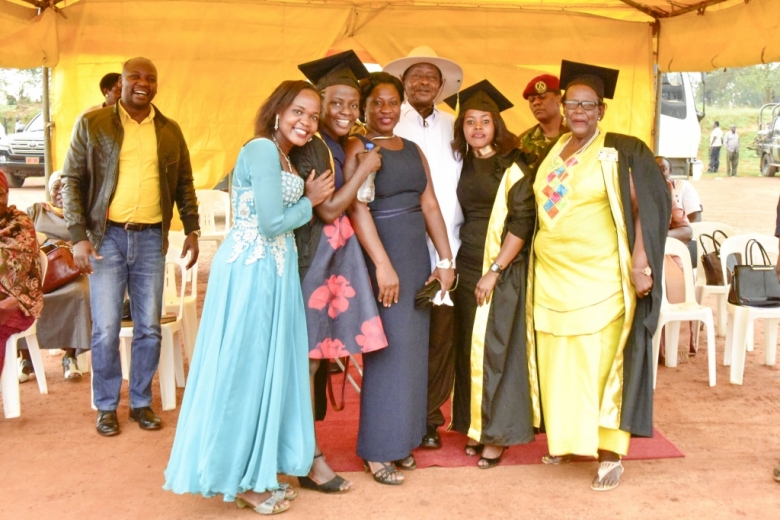 President Yoweri Museveni has hailed State Minister for Primary Education, Hon. Rose Mary Sseninde, who is also Wakiso District Women Member of Parliament for empowering women and youths of Wakiso District through vocational skills saying that will enable them serve the nation and gradually empower them to get out of the poverty cycle.

The President was speaking during 4th graduation ceremony for women and youths of Wakiso District organized by the Sseninde Foundation. The ceremony took place at Wakiso District headquarters where over 30,000 skilled women and youth from the areas of Entebbe Katabi, Nabbingo, Mutundwe, Nansana, Katende, Kirinya, Buwanuka, Bembe, Namugongo, Gangu and Buwembo, among others in Wakiso District, successfully completed training in vocational skills in bakery, hair-dressing, tailoring, catering, knitting, briquette making, candle making and agri-business to mention but a few.

Mr. Museveni, who was chief guest, observed that what Hon. Seninde, other Members of Parliament and State House Comptroller, Mrs. Lucy Nakyobe were doing in their constituencies, was a sign that Uganda was finally waking up to serve the people and teach them how to amass wealth for themselves. He further explained that what Hon. Seninde is implementing was part of the 5th NRM Ten Point Program of creating small industries as per the 1996 Movement Manifesto.

“If you are sick, you ask for directions to the hospital. NRM has also given you a direction on how to alienate poverty. You must be able to participate in one of the four sectors. Here, you have been taught to create small industries and do service,” he said.

President Museveni stressed the need for Ugandans to stop importing products like shoes and clothes because they are able to make them from the abundant resources that the country has.  He noted that this would help create jobs for youths and also make money for the country that would circulate in the national economy.

President Museveni promised Shs.100 million to support the Sseninde Foundation as well buy tailoring and salon equipment for the graduands to help them start-up jobs and businesses.

Hon. Sseninde reported that the Foundation was facing a challenge of few men joining in the training sessions. She noted that only 5% of men had graduated adding that this was partly due to the perception by some men who only wanted to participate in the get-rich-quickly schemes. She said that the Foundation is not that type of organization.

Mrs. Sseninde requested the President to support the Foundation through the creation of mechanic and carpentry workshops to encourage and attract the boy child to participate in skill training.