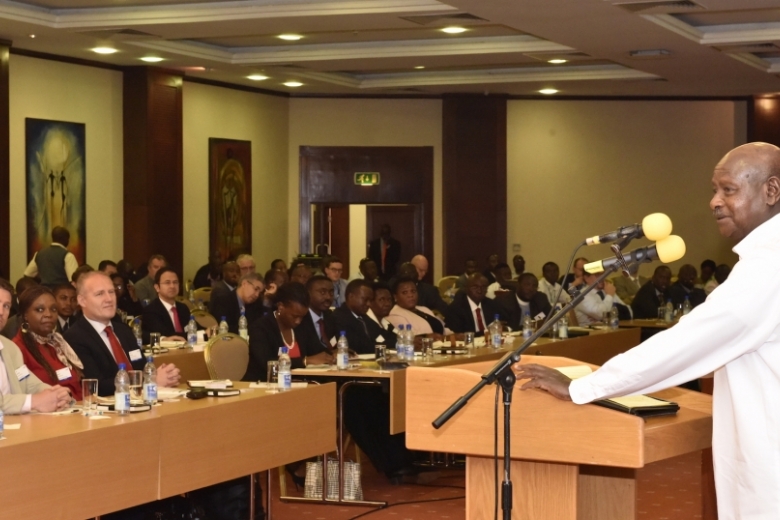 President Yoweri Museveni has today re-affirmed his earlier position that Uganda will not spend any of her oil revenue on consumables. He said the country will dedicate the revenue from the oil resource to specific areas that propel national growth and form the backbone to national prosperity.

He was speaking at the opening of the second Uganda International Oil and Gas Summit today at the Kampala Serena Hotel. The two-day oil and gas summit is running under the theme “Uganda Oil and Gas Industry: a driver to national prosperity and regional integration.”

The President announced that Uganda’s oil revenues will be consolidated into a fund that will be dedicated to the development of infrastructure adding that particular attention will be given to such areas like electricity, the railway, roads, developing the human resource, scientific innovation and agricultural modernisation especially working on the irrigation system to mitigate the danger of delayed rains with a view to ensuring that farmers can do agriculture all the year round.

He told the participants that as the country embarks on commercial oil production, Ugandans must know that the country cannot survive on oil revenue and noted that the oil and gas revenue will be integrated into the national economy to form part of the base to country’s modernisation agenda.

“Petroleum is a small aspect of a big story of prosperity because it is not more important than agriculture. It will only help us get quick money that we should use to build a durable economic base for Uganda for today’s and future generations,” he said.

He warned government officials against frustrating investors and further reminded them that in an economy like Uganda’s, which is private sector led, investors should be given all the needed information and support to facilitate investment because failure to do that is tantamount to great disservice to the country.

The Minister of Energy and Mineral Development, Hon. Irene Muloni informed the Summit that it makes economic sense for any company to invest in oil exploration in Uganda because the exploration success rate of 85% is higher than anywhere else in the world as the exploration cost is very cheap at less than a dollar per barrel of oil.

She revealed that her Ministry will issue more exploration licences by the end of this year adding that Uganda’s target is to start commercial oil production by 2020. She further disclosed that the government had zeroed in on developing the oil pipeline from Hoima to the Port of Tanga in neighbouring Tanzania because it was found to be the least costly route.

The United Nations Development Programme Country Representative Ms. Rosa Malango hailed Uganda as a regional and international leader in many spheres of development including being number one host of refugees in the whole world.

She, therefore, made a strong appeal to the Government of Uganda and all other stakeholders in the oil and gas sectors to put issues that affect humanity first in this oil exploration phase. She particularly singled out mitigating disaster and conflicts, safeguarding the environment, proper urban planning, protection of the rights of the marginalised especially the women and the youth and working in accordance with the provided laws and policies. ENDS