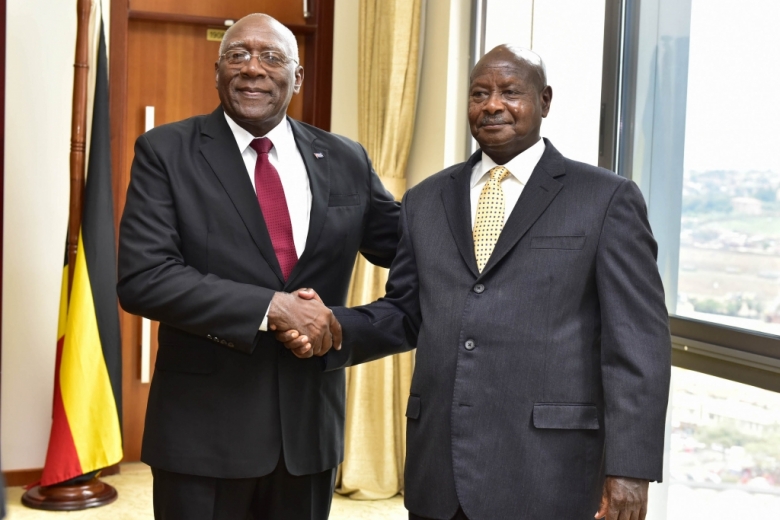 President Yoweri Museveni has disclosed that the Government of Uganda will re-open its embassy in Havana, capital of Cuba.

“We shall be happy to open our embassy in Cuba. We had one but we retreated. We should go back to Cuba,”he said.

The President was this morning meeting the visiting Cuban Vice-President, Mr. Salvador Valdes Mesa and his delegation who called on him in Kampala.

Welcoming the Cuban delegation to Uganda, President Museveni also saluted the Cuban Comrades who participated in the liberation of Angola adding that the African Union (AU) has recognised the Caribbean as the 6th African region.

President Museveni told his guests that some of the causes of instabilities in African countries as ideological whereby many of them have not developed political movements that have a grasp of the correct diagnostic orientation of their societies. He added that they confuse identity with interest. He emphasized that the issue of prosperity must not be forgotten. He noted that Africa lost time because people had not identified the bottlenecks that impinge on their societies. He, however, revealed that Africans have now identified some of the bottlenecks that had caused a delay development in Africa, namely ideological disorientation and the fragmentation of the African market, among others.

The President informed his guests that the NRM government opposed sectarianism based on gender, religion and tribe .He said East African community, among other bodies, was formed in the region in order to get a larger market and expand the tax base because larger markets are very important stimuli to our production.

The Cuban Vice-President said the purpose of their visit to Uganda is to improve and strengthen the bilateral relationship between Uganda and Cuba. He congratulated President Museveni and Ugandans upon the country’s 54th Independence Anniversary celebrations due on Sunday 9th October 2016.

Vice-President Valdes Mesa said Africa is growing economically and that an immense volume of infrastructure development has taken place in the different parts of the African continent. He commended the African Union for the achievements made in the development of the continent.

Uganda and Cuba have for the last 40 years enjoyed close friendship. The two countries have supported each other at international fora through the Non-Aligned Movement to defend and

protect their strategic political and economic interests and partnership. ENDS