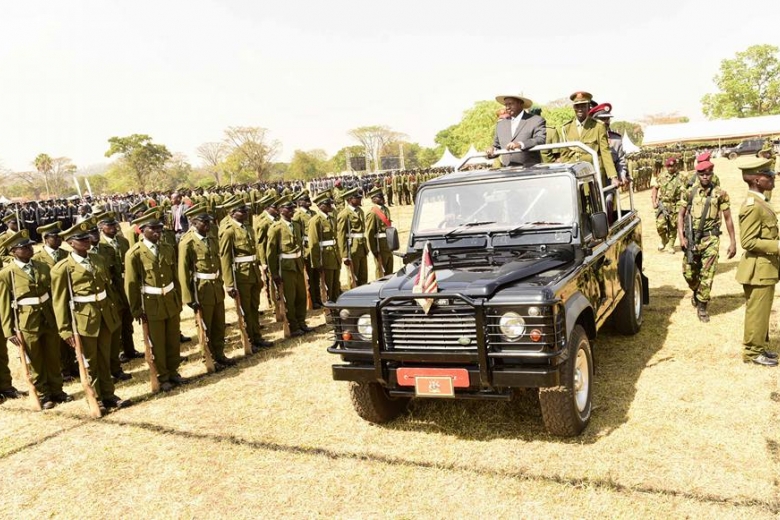 President Yoweri Museveni has said that Uganda is going to go from being mainly an importing to an exporting country.

The President was speaking at the 31st National Resistance Movement (NRM) Anniversary celebrations held today at Masindi Golf and Sports Club grounds in Masindi district in Bunyoro Sub-Region. The celebrations were held under the theme ‘Uganda's Success Story Under NRM leadership, a Shared Victory’. During the celebrations, 36 individuals received Jubilee Medals, 46 got Luweero Triangle Medals, 45 had Police Medals while 49 had Nalubaale Medals

"Ugandans keep buying but we need to sell more. We need to eliminate the shame of importing things we can make locally here in Uganda. We earn US$5 billion in exports of goods and services but import US$700 billion of good and services," he said.

Mr. Museveni reiterated that most of the goods imported, such as textiles, furniture and others, can and will be made locally in Uganda.
"The major aim of government putting money in SACCOs and the Innovation Fund is to contribute to efforts of processing and manufacturing; which will in return increase our exports," he said.

President Museveni said government will focus on infrastructure development such as roads, dams and the railway which, he observed, will enable Uganda to export her oil and gas thus creating an independent money base and putting an end to her begging culture.

He revealed that in the 2017 – 2018 budget, there will be 10% budget cuts for Government Ministries and agencies so that roads and the oil refinery equipment are obtained in order to start the pumping of the oil. He, therefore, directed the Prime Minster to control foreign trips for government workers so as to save money and concentrate on infrastructure development.

The President said that government decided to use the Tanzania route rather than the Kenyan route for the oil pipeline because the roads for the refinery equipment were ready in the east and that there are roads government wanted to work on in the south but resources were constrained.

"We are now going to work on the Lusalira – Kabamba – Makonde, Ntutsi – Ssembabule road which the pipeline will use," he said.

Turning to the banishment of household poverty, President Museveni urged Ugandans to embrace the Operation Wealth Creation programme in order to ensure food security and to promote commercial agriculture.

"Government launched a campaign for all Ugandans to join commercial agriculture as majority (68%) of the homesteads in Uganda are subsistence farmers and only 32% of the homesteads are in the money economy," he said.

He also called for government audit to know the number of Ugandans who are engaged in commercial agriculture.

President Museveni noted that there are still gaps in the education curriculum but added that discussions are on going to improve it as well as the methods of assessment of students. He said that every Parish must have a government primary school; and that every Sub County must have a secondary school and a vocational school for each Constituency.

"Once we fulfill that the other battle is to build houses for teachers so that they stay near the schools," he said.

President Museveni said that he would have preferred to postpone this year's celebrations to 20th February, the day the NRA won Masindi so as to fully highlight Masindi’s importance in the NRM struggle.

"The people of Masindi provided soldiers and food stuff to NRA soldiers in 1982 - 84 period and NRA scored a big victory here led by Gen. Salim Saleh," he said.

He thanked all those that have contributed towards the success of the National Resistance Movement NRM.

During the celebrations, the President also launched the NRM paper/ publication titled "The Public Lens".