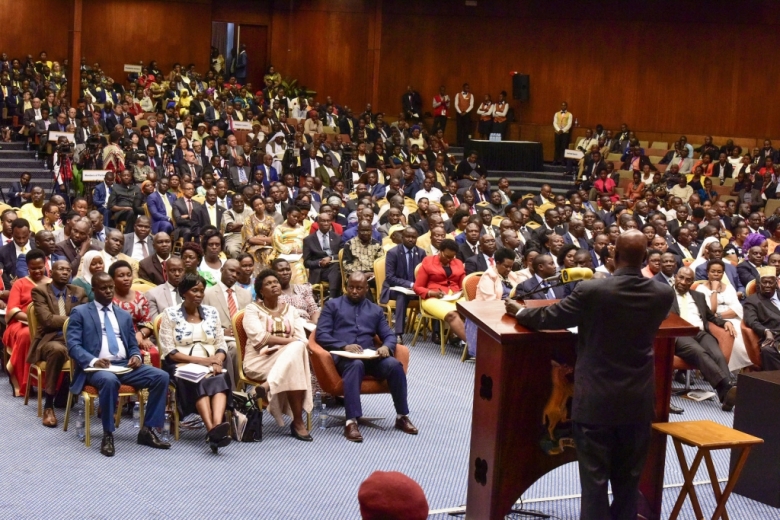 President Yoweri Museveni has assured the people of Uganda that the country is on the right development track and that her development agenda is unstoppable. He, however, warned that the rampant corruption and poor implementation of government programmes are the number one enemies that stand in Uganda’s development path.

Delivering the State of Nation address and opening of the 3rd Session of the 10th Parliament at Kampala Serena Conference Centre, the President said that although the National Resistance Movement Government has for years implemented programmes aimed at developing the country, the cancer of corruption, negligence and poor implementation of government programmes has slowed the country’s development process and retarded her economy.

He wondered why the Ugandan Government, which is represented up to the village level, with elected and appointed leaders, cannot effectively monitor and ensure the proper implementation of government programs and report all forms of corruption and misuse of government resources.

The President, therefore, said that he would issue a directive to be copied to all government officials at all levels to ensure that all government programmes and services, especially in education, health, agriculture, environmental protection and the road sector, are effectively delivered. He particularly tasked Chief Administrative Officers in districts, who are Accounting Officers and heads of personnel in their areas to ensure that government officials under their supervision do their work without fail.

He said that to ensure this takes place, he had created a service inspection unit in his office to do the monitoring and report to him for action. He appealed to the public to report corrupt officials and those failing government programmes to that unit whose contacts, he said, were to be made public. He also wondered why the Inspectorate of Government that is tasked with fighting corruption was not doing their part. He asked the Inspector General of government, Irene Mulyagonja, to investigate why the public has lost trust in her office and are not reporting the corrupt to her office.

On the economy, the President said that since the NRM government made a correct political decision to invest heavily in electricity, the road sector and security, the country’s economy has been growing and is projected to grow at a rate of 5.8% in the next financial year adding that Harvard Research Centre in the USA has projected that Uganda’s economy will be the fastest growing economy in the world by 2026.

He, however, said that with enough and cheap electricity, a good road network and security, the remaining challenge is how to lower the cost of doing business by constructing the standard gauge railway, reviving the Uganda Airlines and availing low interest rate loans to manufacturers and farmers.

He said that to ensure manufacturers access low interest loans, the government will capitalize the Uganda Development Bank and put more money in the Micro-Finance sector and ensure that they get loans at 12% interest rate.

On agriculture, the President said that government is to invest in a number of irrigation schemes in the new financial year. He also added that government is attracting investors to manufacture and assemble solar power irrigation pumps in Uganda to enable farmers access them cheaply. He used the occasion to call on Members of Parliament and all leaders from all walks of life to devote efforts to mobilising the people they lead to work towards wealth creation and getting rid of household poverty.

He cautioned leaders against riding on the ignorance of the population saying they should not be politicizing issues of strategic survival and the prosperity of Uganda.

Turning to security, he said government will defeat urban crime and terrorism the way it defeated rural terrorism and all rebel groups. He reported that 90 arrests have been made in line with the murder of Joan Kagezi, Deputy Inspector General of Police, Andrew Kaweesi, the Moslem Sheikhs and the murder of Susan Magezi. He also pledged to increase funding for sports activities in the country.

He reiterated the need for environmental protection and warned those who have invaded wetlands to vacate them peacefully.