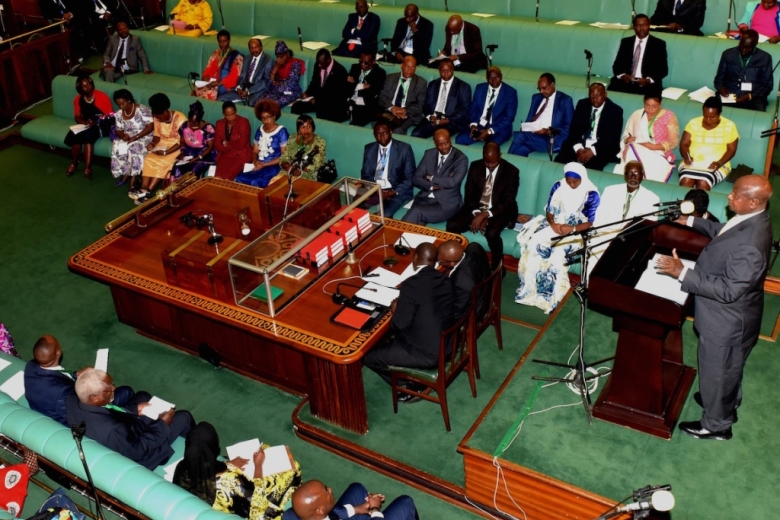 Addressing the 5th session of the 3rd Assembly of the East African Legislative Assembly at Parliamentary buildings in Kampala this afternoon, the President noted that just like economic integration is important for the economic prosperity of the region, political federation is very crucial for strategic security of the region as well as for guaranteeing the safety of the future generations especially against the emerging world giants who continue to compete for the limited world resources.

The President told the regional Assembly legislators that they need to be worried that Africa, with over 1.3 billion people and endowed with a lot of natural resources, had nobody to guarantee our security and safety for the current and future generations. He, therefore, emphasized that a politically united East African Community could be a strong focal point to build on and secure the future of the region.

“As we speak today, no one is guaranteeing our security and safety as Africans. There is no centre of gravity for strategic security. You cannot secure yourself when you are small man in a modern world because the modern world is for giants,” he said.

“Our current administrative structures are fragmented and very weak and we have no choice but to unite and safeguard our destiny. What will you do for example if a modern China, with its big population, becomes imperialistic in the future and want to occupy parts of Africa?” he wondered.

He appealed to the people of East Africa to take advantage of their unique situation of having closer cultural ties and a uniting language “the Swahili” and work toward realising total integration.

President Museveni asked all leaders in East Africa at different levels to make good use of the population of the region now standing at 162 million people which, he said, is the greatest resource the region has.

He specifically asked the leaders to use the population as a bargaining tool to attract investments in the region saying that with 162 million producers and consumers of goods and services, the government through policy regulations should compel companies interested in selling to the region to produce from the region rather than from other countries and merely import to the region.

The President commended the region for having done enough to develop its infrastructure such as roads, electricity, the undersea cable and are now working on the railway. He noted that all these achievements combined have reduced the cost of doing business in the region and are making it competitive.

On the danger posed by the changing weather patterns, the President called on East Africans to stop the destruction of the environment by encroaching on the wetlands and forest reserves as well as cultivating in wetlands, on river banks and on lake shores. He said that the destruction of wetlands greatly contributed to the reduction of rains because the wetlands contribute 40% of the rain Uganda receives. He described the situation as a serious one that needs the attention of everyone.

“Wetlands should not be for cultivation. They should be rain catchment areas and need to be protected,” he said.

President Museveni also congratulated EALA and the people of East Africa for standing firm against female genital mutilation an act, he said, was “cruel and criminal.” He castigated all those who regard it as cultural telling them that there was nothing cultural about it.

The Speaker of the East African Legislative Assembly, Rt. Hon. Dan Kidega, congratulated President Museveni upon his re-election as the President of Uganda and commended him for honouring all his invitations to address EALA.

He further commended him for the support rendered to the regional Assembly during the last five years. He, however, said that budgetary constraints had hindered the performance of the Assembly and appealed to all member states to ensure that they honour their obligations for the good running of the East African Community affairs. He thanked the members of EALA for their commitment to work that has seen the Regional Parliament pass 25 bills and debate 80 reports passing 63 key ones in the past five years.

The Speaker of Uganda Parliament, Rt. Hon. Rebecca Kadaga, commended the excellent relationship that exists between the Ugandan Parliament and EALA. She commended President Museveni for sparing time to address EALA members all the time that the regional assembly has sat in Uganda. She said that this shows the President’s ardent commitment to the process of regional integration. ENDS