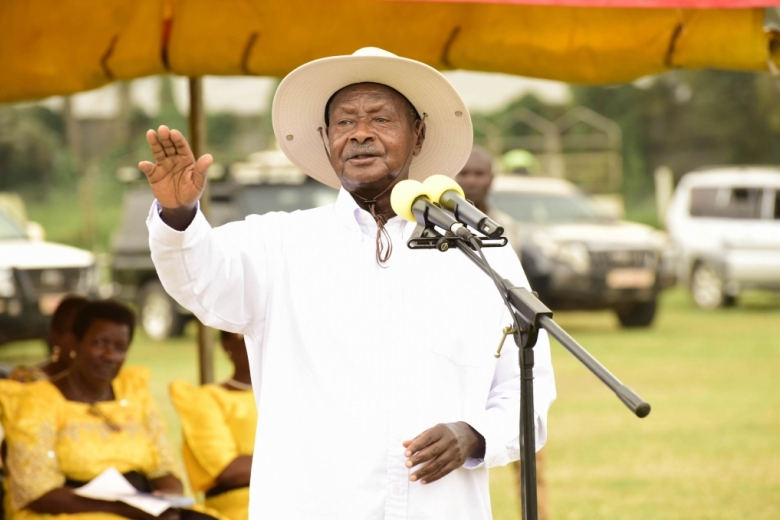 President Yoweri Museveni has called on the people of the Ankole Sub-Region in South Western Uganda to stop the vice of disrupting the flow of River Rwizi.

The President made the call last evening during a live radio talk show at Mbarara State Lodge as he continues his countrywide tour to sensitize wananchi on wealth and job creation campaign.

“The Government will not use force to expel the people who have encroached the River Rwizi banks. They should vacate peacefully. We shall do all it takes to protect the river by restoring the vegetation lost at the hands of people who fail to respect the environment,” he vowed.

Mr. Museveni said that Government was looking at possibilities of tapping water from River Kagera in Isingiro District to address the increasing water demands particularly from the industries in Mbarara and other areas in the region. He advised the people to establish fishponds off the banks of the wetlands so that they are able to generate income for their families without degrading the environment.

The President, who was responding to questions concerning the Coffee Bill, refuted allegations that there were plans to introduce licenses for coffee growers. He clarified that Government only wants the registration of coffee to ensure production of good quality coffee and stop the risk of compromising the country’s reputation of quality coffee on the global market. He reminded the people of Ankole Sub-Region and Ugandans at large that coffee buyers are interested in the maintenance of good quality coffee adding that the current target was to eliminate the middleman in order to ensure that the farmers maximize their returns from coffee.

Regarding the tourism sector, the President said NRM Government is keen to develop the various tourist sites in in the country order to further boost and strengthen the sector. He noted that tourism is one of the major areas that play a leading role in the national economy.

President Museveni allayed fears of livestock farmers over suffering losses from ticks that are becoming resistant to acaricides due to misuse of livestock drugs. He called on veterinary personnel to enlighten farmers on the correct means of administering livestock drugs to avoid compromising efficacy of the drugs.

Regarding job and wealth creation struggle, the President reminded the people of Ankole Sub-Region that they must work and ensure both food and income security for their families. He advised them to embrace the 4-acre production plan that facilitates enhanced productivity adding that cultivation of fruits mangoes, oranges and pineapples, coffee, pasture for zero dairy grazing, poultry and piggery for non-Muslims, on top of food crops, will go a long way in securing families food and income security.

The President Museveni also cautioned against the vice of land fragmentation that has affected some families, most especially after the death of family heads. He advised wananchi to utilize the available family land and other properties in a consolidated manner and only share the profits from those consolidated properties for long term gains.

He revealed that Government has established a number of funds to expand the availability of working capital. He enumerated the Industrial Fund to be used for establishment of industries in all the zones in Uganda as one of the numerous funds adding that the various production sectors would be funded through their SACCOs. He also said plans were underway to establish a Leaders’ Fund to enable elected people access working capital.