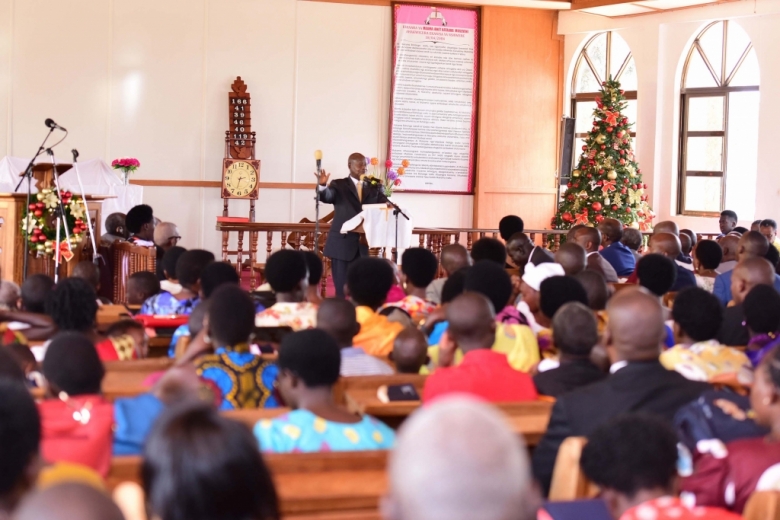 President Yoweri Museveni has called on the elite youth to sensitize the public on issues affecting their life and share with them important information that can help wananchi solve challenges they face.

“I would like to remind the educated youth that they should help the public to know what they don’t know because they are the ones who are informed. They should share information with the public,” he counselled.

The President, accompanied by the 1st Lady, Janet Museveni and family members, was this morning among Christians of Nshwerenkye who attended Christmas service at St. Luke Nshwerenkye Church of Uganda in Kenshuga Sub-County Kiruhuura district.

The service was presided over by Rev. Kwesiga Emmanuel Katamunanwire.

The President reminded the congregation that their area had been infested by tse-tse flies but after his Advanced Level studies in the 1960s, his group sensitised wananchi on the dangers of pastoralism and encouraged them to adopt the habit of permanent settlement. He, therefore, asked the youth to emulate the same example and share whatever important information they have with wananchi that could help the people to overcome some of the challenges they face.

Mr. Museveni assured cattle farmers that government is to procure drugs that will eliminate ticks that disturb their animals during the dry season. He also urged farmers to plant pastures, harvest and store them for their animals to feed during dry spells

The President asked the leadership of Nshwerenkye Church of Uganda to organise their Jubilee celebrations to enable elders also attend while they are still alive.

The First Lady and Minister of Education and Sports Hon. Janet Museveni, urged the people of Rwakitura in particular and Uganda in general to thank God for the gift of life as they celebrate the birth of Jesus Christ. She pointed out the significance of the Christmas tree saying it is a sign of light that shines on the people of the world that had been filled with darkness before the nativity of Jesus Christ.

“The importance of Christmas is a sign of light that shines on the people of the world which was filled with darkness,” she said.

Mrs. Museveni urged the congregation and all Ugandans to unite as the world commemorates the birth of our Lord Jesus Christ. She further encouraged all Christians to constantly pray to the Lord and urged them to take care of the less privileged like the poor, the sick and the elderly.

“If you do that God, will reward you,” she said.