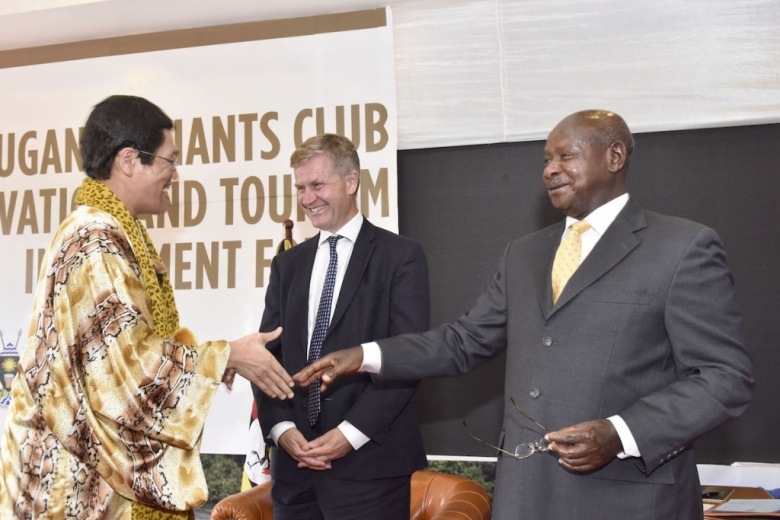 President Yoweri Museveni has said that there is no better place for tourism in the world than Uganda.

The President made the remarks at the Uganda Giants’ Club Conservation and Tourism Investment Forum that took place at the Lake Victoria Serena Golf Resort and Spa Hotel in Wakiso district. Mr. Museveni said that from his geography studies while in school and travels around the world since he became President, he has not seen any part of the world more interesting than Uganda.   “Uganda’s lowest point is 650 meters above sea level while the highest point is 5009 meters above sea level. This location makes Uganda unique for agriculture and tourism,” he said.

He said that this location enables the country have good flora and fauna. “Whatever tourists want to do in agriculture and tourism can be done in Uganda,” he said.  The President said that tourism is a very big industry in the world hence the need to talk about conservation and also the business opportunities it brings.

“Tourism accounts for 9% of the global GDP (USD 6.6 trillion) and out of 11 jobs in the world; one job is in tourism. When we talk about the conservation, it is not just coming out for nature but having business goals. We can get a lot of money from tourism,” he said.

The President said that despite the inefficiency of the administrators and policy people, the tourist arrivals in Uganda have grown from 700 people in 1986 to over 1.3 million people. He noted security; strong laws against poaching and infrastructure development, have contributed to the rise in tourist numbers. “There are still a few gaps but otherwise we have a sufficient system here. Here, we never need the United Nations. Here we guard ourselves,” he said.

President Museveni called upon the Uganda Wildlife Authority (UWA) and other actors in the tourism sector to develop these products by adding the cultural elements so as to help tourists understand the history of the places, people and animals saying that some of the birds and animals are not found in the countries where tourists come from and therefore they merely describe the animals and places.

“When studying biology in school, they were using many Latin names like medulla oblongata. We need to also store the knowledge of the ancient people and share it with the world,” he said. President Museveni said that his government is committed to working on roads adding that it would work on roads to Karamoja’s Kidepo National Park.

Mr. Paul Alistair of the Africa Wildlife Foundation said now is the right time for the Giant Stars to get into Uganda. “The Giant Stars are aligned for Uganda and are looking at five National Parks: Murchison, Kidepo, Queen Elizabeth and Semilki,” he said.

He called for the development of more infrastructure such as road and accommodation facilities saying that Uganda has a lot to offer to tourists.  “There is a diversity of products and tourist attractions. Apart from the chimpanzees, Uganda is home to many bird species that cannot be found anywhere else in the world,” he said.

The Minister of Tourism, Wildlife and Antiquities, Prof. Ephraim Kamuntu, said a new chapter has been opened in Uganda’s tourism and conservation efforts. He called upon the different actors to march the words spoken at the event with results.