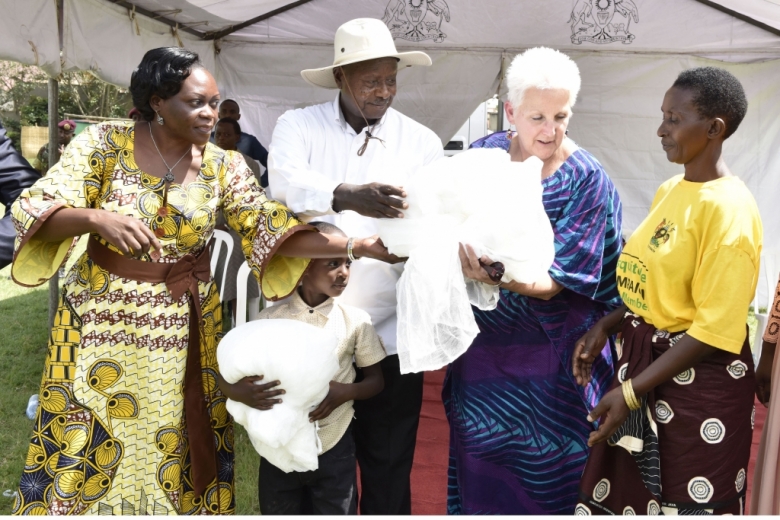 “I direct all the District Medical Officers to maximize efforts to eradicate malaria. The Programme has enabled the drastic reduction of malaria in Uganda. It affects the health of our people. It is a disease of the poor and it is also a cause of poverty. Malaria causes illness, cripples and kills. Prevention of this disease is very important. It is a big constraint to economic development. In 2017, 9 million people were infected and 5,100 people killed,” he said.

The President was speaking today in Kabwoohe Municipality, Sheema District in South Western Uganda as he officially closed the ‘sleep under a mosquito net campaign’. Prime Minister, Dr. Ruhakana Rugunda, launched the countrywide campaign in Apac District in February 2017.

For several decades, malaria has been the leading cause of sickness and death in Uganda, claiming over 150 lives daily. Efforts by the Government of Uganda, in partnership with donors from the international community to combat the disease through the increased access and use of long lasting insecticide treated nets among the population, presents a ray of hope. The campaign has been concluded with the districts of Bundibugyo, Kagadi and Kasese in Western Region and Mbarara and Sheema in South Western Region. A total of 19,160,875 nets have been distributed in all the districts of Uganda surpassing its target of 85%.

President Museveni called on all wananchi to stop using mosquito nets for weddings and fishing. He observed that indoor residual spraying was not well done. He, therefore, tasked the Ministry of Health to ensure that the spraying is implemented for the welfare of all the people. He observed that the annual economic growth has been lower in the malaria-affected countries than that of the malaria free ones.

He informed the people of Sheema District that in 2004, Uganda changed the treatment of the disease adding that in 2006 the Government provided artemether and other related drugs free of charge. He reiterated that the NRM Government is committed to ensuring that Uganda is a malaria free country. He directed the Ministry of Health to provide bicycles to the 5,000 Muluka Chiefs in the country in order to enable them monitor the effective utilization of the free mosquito nets in the homes.

President Museveni called on the people to have prompt treatment as part of the measures to arrest the spread of malaria. He revealed that the Ministry of Health and that of Agriculture, Animal Industry and Fisheries are already working jointly to administer larvicides in valley dams in order to prevent the breeding of malaria causing mosquitoes.

Mr. Museveni thanked the donors, especially the Government of the United States of America and the Global Fund, for supporting the efforts of the Government of Uganda to eradicate malaria. He also called on Sheema District to become pioneers in the eradication of household poverty. He pledged support to the various commercial ventures that are being undertaken by wananchi in Sheema District as he presented a mosquito net each to a 7-year old boy, one old man and another to an old woman.

State Minister for Health (General), Hon. Sarah Opendi, said that the malaria campaign was launched in 2009 and that to-date, over 80% of the population has been covered She reported that economic stagnation was partly caused by malaria infections.

The American Ambassador to Uganda, Ms. Deborah Malac, said that her country has supported Uganda in the provision of nets adding that in 2016, children under 5 years old had been shielded from malaria attack through the distribution of nets. The envoy said that the American Government remains committed to ensuring a malaria free Uganda.

The Director of Malaria Consortium for Eastern and Southern Africa, Dr. Godfrey Magumba, expressed gladness about the support Uganda has registered in the distribution of mosquito nets.

Sheema District LC5 Chairman, Canon David Babigumira saluted President Museveni for the effective malaria control efforts and revealed that the people of Sheema District are engaged in the production of shoes, soap and soya beans, among other activities. He introduced the South Korea delegation that is in charge of the promotion of agriculture in Sheema District.