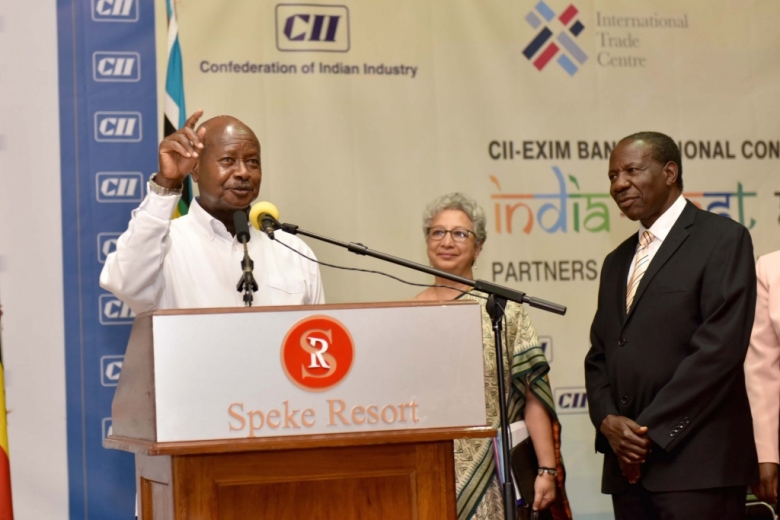 President Yoweri Museveni has advised prospective investors to target investing in areas of agro-processing and value addition to minerals like phosphates, in Uganda.

The annual CII-Exim Bank Conclave on India-Africa partnership project is a singular platform that was formed for the purpose of cross-border partnership building, at the institution, government and enterprise levels. The conclave facilitates discussions for bilateral, economic and business capabilities.

The President told delegations from India, Tanzania, the United Kingdom, Uganda and other partner countries that because of the historical background that India had with Africa, there is very big potential for cooperation in businesses. The vastness of the market between India and Africa, he added, was a crucial factor that would be advantageous to both parties if utilized fully.

“India and Africa can complement each other very well. We have a historical link of using the English language which we should take advantage of. The Indians have been here for the last 130 years. In 1924, the father of Mehta began producing sugar in Uganda,” he said.

He also emphasized the need for infrastructure development to easily link a producer to a consumer, and helps to lower the cost of doing business in an economy. He further noted that human resource, good security and macro- economic stability are very essential in the smooth operations of businesses.

Mr. Museveni explained that the ideological disorientations that focused on identity rather interest was a hindrance to the development, prosperity and wealth of the people.

"Am a rich man because of the people who are not my tribe. The man from India can buy my milk. Bankrupt leaders who spend a lot of time on identity, are useless people," he remarked.

The Minister of Finance and Economic Planning, Hon. Matia Kasaija, reported that India tops the licenced investments in Uganda. He revealed that there are several investment opportunities in Uganda especially agriculture, agro-processing business, roads, rail and water transport. He added that the Government of Uganda has identified these sectors with the goal of facilitating production. He asked the Indian business community to invest in Uganda to tap into the country’s wide range of minerals that require processing.

The Secretary of Commerce for India, Ms. Rita Teaotia, talked of the strong partnership that India has with African countries, especially Uganda. She noted that from the size and delegation of India at the Munyonyo Conference, is enough strong sign of the economic interest and affinity that India has towards Africa. She added that despite some challenges of customs procedures and diverse regulations in doing business, India is ready to make sure that the business partnerships the Sub-continent has with Africa are fully realized.