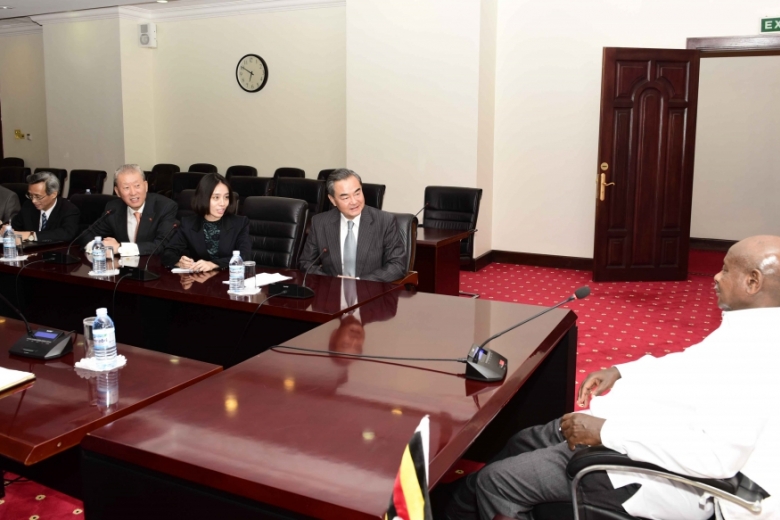 President Yoweri Museveni has said that Africa will become independent through integration and industrialization.

“Industrialization must go hand in hand with market integration. You cannot industrialize without infrastructure,” he said.

President Museveni was speaking during a meeting he held with the visiting Chinese Minister of Foreign Affairs, Mr. Wang Li, who called on him yesterday at State House, Entebbe. The Minister was accompanied by the Chinese Ambassador to Uganda, Mr. Zhao Yali.

The President noted that whereas its Emperors united China long ago, Africa is still trying to get united after colonialism had fragmented its market.

“We are doing this through EAC, COMESA, SADC so that we not only industrialize but also create a market to absorb what we produce,” he said.

President Museveni commended the Chinese for allowing over 440 Ugandan products to enter China without taxes. He also called upon the visiting Chinese Minister to encourage more Chinese investors to come to Uganda and do business in the country.

“The most important collaboration is tourism, trade access and infrastructure,” he stressed.

On his part, Mr. Wang pledged that China will continue to provide help and support to Uganda in exploring a successful path to development. He also reaffirmed his country’s support to IGAD’s efforts on South Sudan saying that without peace there can be no development.

“China fully supports IGAD’s efforts in South Sudan and will continue the support at the UN. African issues must be resolved by African people in an African way so that conflicts can be resolved and peace maintained,” he said. ENDS