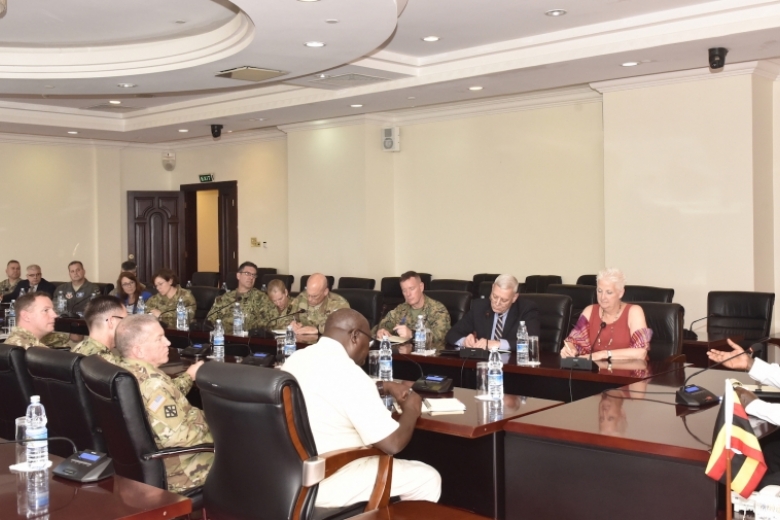 President Yoweri Museveni has said that ideological opportunism has caused wars and conflicts in Africa.

He made the remarks today at State House, Entebbe where he received and met a delegation of military Generals and Brigadiers from the National Defence University in the United States of America, led by the Assistant Commandant Marine Corps, General John Paxton. The American Ambassador to Uganda, Deborah Malac, accompanied the high-ranking US military delegation to Entebbe.

“Ideological opportunism has been the main challenge in Africa. It attempts to exploit identity. It has caused wars and conflicts in Africa. Personalities that have nothing to offer to the people exploit them through identity,” he said. He noted that the correct idea was to relate with people who need what we have adding that such people provide a market for our products.

President Museveni revealed that in Uganda there were mistakes made by traditional chiefs who promoted chiefdoms. He said that this facilitated the slave trade and that the chiefs were the problem in Africa. He informed the attentive Generals that by the time of independence, the political parties in Uganda were formed along sectarian lines based on tribes and religion.

Mr. Museveni disclosed that the students’ movement in Uganda, which was transformed into a political leadership, managed to liberate the country and was able to address the interests of wananchi devoid of such issues like identity. He informed his guests that Uganda has been stable and secure because “we fought against sectarianism and the country will continue being secure.”

President Museveni further said that the NRM Government has succeeded in building a national Army. He attributed this positive achievement to the factor of the Army leadership being able to look out for and recruiting personnel who can shoot and maintain discipline. He reiterated that a country cannot have sustainable prosperity if it does not have security.

He also observed that focusing on the interests of the people lays a strong foundation towards working and achieving prosperity. He added that similar interests by the population will promote patriotism not only in Uganda but also in the region and beyond and stressed that “we must talk about Pan-Africanism.”

President Museveni told the US Army delegation that colonialism created a fragmented African market that has resulted in 54 countries on the continent. He was, however, pleased at the emergence of regional blocs such as the East African Community (EAC) which has a population of 170 million while the Common Market for Eastern and Southern Africa (COMESA) has 500 million. He observed that the two economic blocs have enabled the people to negotiate credibly with the outside markets such the Chinese.  He said that the integration of the African markets was not only to expand our markets but also to increase the continent’s bargaining power.

Answering questions pertaining to security in Uganda in particular and the African continent at large, President Museveni told his guests that Uganda does not have any problem with security the country, under the vanguard of the National Resistance Movement (NRM) has managed to build the defence capacity. He disclosed that Uganda is working with the rest of the African continent to create a Regional African Force adding that it would be supplementary to the African Stand-by Force.

The President expressed his pleasure that the African population has grown to 1.25 billion people. He was optimistic that the population of Africa would further grow to a total of 2.5 billion in 2050 and said the past challenge was hinged on the continent’s under-populated status.

The visiting members of the delegation saluted President Museveni for sparing his time to address them on important matters. ENDS