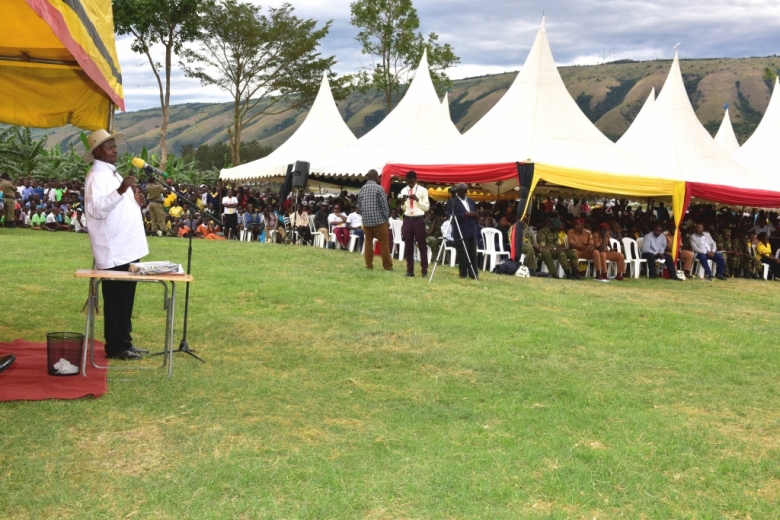 President Yoweri Museveni launched a new Presidential Fast-Tracking Initiative on the Elimination of HIV/AIDS that targets total elimination of the scourge from the Uganda by 2030. He used the occasion to remind Ugandans in general and those devoted to the fight against the scourge that the struggle to eliminate HIV/AIDS from our society should focus more on preventive measures because the pandemic is avoidable.

Speaking during the launch of the initiative at Isingiro District headquarters in Isingiro Town Council, the President said that because AIDS has no known cure to-date, Ugandans need to focus on how to avoid contracting the virus which, he said, is the only sure way the virus can be eliminated from the Ugandan society. The ceremony attracted representatives from 28 districts if South Western Uganda.

“AIDS is not infectious which was our original worry in the 1980’s and it is spread through a few well known ways that can be avoided and if new infections can be halted AIDS will be history,” he said.

The President said that he had started a fresh advocacy initiative in the fight against the HIV/AIDS scourge after getting reports of increasing new infections, especially among young girls, due to complacency in society that was affecting the struggle against the virus. He added that this new initiative is meant to rekindle the earlier efforts and remind Ugandans that HIV/AIDS still exists in our society and poses a great danger but can be defeated.

He, therefore, appealed to those involved in the fight against AIDS to give out clear, bold and straightforward messages to the public with emphasis on prevention, and for those already infected, to get treatment as soon as possible.

He reminded them that embarking on treatment early, one reaps several advantages including increasing one’s life span but emphasised that the most important one is the fact that once one is on Anti-retroviral (ARVs) drugs, one reduces the risk of spreading HIV/AIDS to others.

Mr. Museveni also reminded the people of the importance of testing for HIV/AIDS saying it enables one to properly plan for one’s life and to get treatment where necessary. He noted that although ARVs are not a cure and have several life threatening side effects. They help prolong life making it possible for one to look after one’s family and is far better than one losing life.

Presidency Minister, Hon. Esther Mbayo, who has been put in-charge of the implementation of the Presidential Initiative to eliminate HIV/AIDS, said that the new program is geared at reminding the public that the virus is real and still exists in our society. She said the programme’s core focus is to engage men in HIV/AIDS prevention in order to halt new infections, stopping mother to child transmission of the HIV/AIDS, ensuring financial sustainability of HIV/AIDS related programmes and ensuring institutional effectiveness in the fight against the scourge. She stressed that to achieve that goal, they have engaged all stakeholders, political, religious, civic and cultural ones.