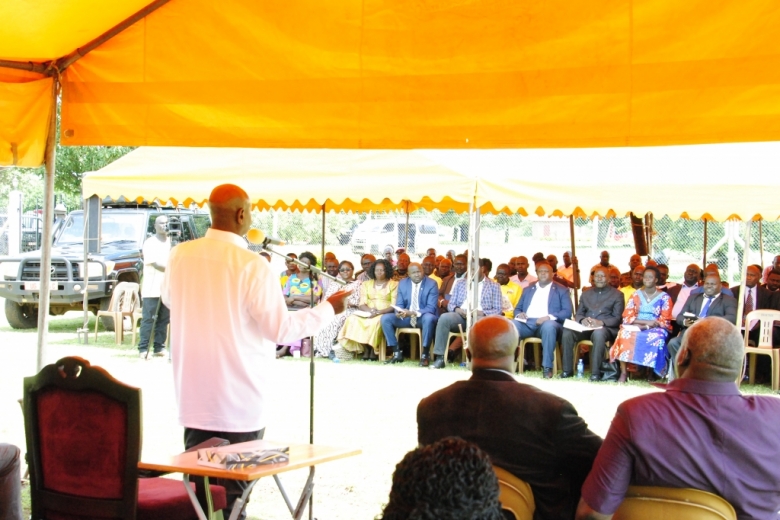 President Yoweri Museveni has appealed to all Ugandans to fight the continued negative vice of land fragmentation. He said the vice is perpetuated through primitive inheritance rites that encourage land sub-division thereby rendering unviable for agriculture. He, therefore, noted that the continued fragmentation of the land will see the country lose most of her productive agricultural asset and propel the population into irreversible poverty.

Addressing political, religious and opinion leaders from Lango Sub-Region at Baralegi Presidential State Lodge in Okwang Sub-County, Otuke District this afternoon, Mr. Museveni rooted for concerted efforts to halt continued land fragmentation that he said was an act of “economic blindness and indiscipline as well as broad-day mass suicide.” The President has been in Otuke District for 2 days to launch the Baralegi Presidential Demonstration Farm, the 3rd of its kind after the one in Luweero District and the other in Busoga Sub-Region.

President Museveni told the leaders of Lango Sub-Region that for a country like Uganda whose economy relies on agriculture and employs more than 80% of her population is employed and fed by the sector, the continued fragmentation of the land will see the country’s future generations becoming poorer and poorer.

“Continued fragmentation of our land is total lack of vision and a country without consolidated land has to perish,” he noted.

He appealed to leaders at all levels in the country to be change agents within their respective communities so as to impact on the mind-set of the people and guide them on how to get out of poverty.

“As leaders, you must be agents of change. To do that, you need to penetrate the psychology of your people, provide answers to their questions and help them to understand things better in the struggle to defeat poverty,” he said.

President Museveni also asked the leaders of Lango Sub-Region to support the government’s 4-acre agricultural model focusing on produce that can be grown on small acreage but are high yielding and fetch high prices. He singled out coffee, fruits, zero grazing dairy cows, poultry and piggery as some of the production areas that need to be emphasised.

He said that poverty has become a source of insecurity in the country to the extent that people have resorted to places of worship to pray for miraculous wealth that, he observed, has seen some unsuspecting citizens lose their property and wealth at the hands of some fake religious institutions.

He also asked local government leaders in the country to make good use of the funds that are remitted to local governments through programmes such as the Youth and Women Fund and the Micro-Finance project and direct them towards agricultural improvement especially by supporting model farmers for the others to emulate.

He discouraged leaders from the mentality that farmers cannot start farming and do production when some things are still not in place like agricultural tractors.

On the reported corruption within the local governments, the President implored the Members of Parliament to take a leading role by carrying out on spot auditing of the government development programmes in their constituencies and report to the relevant Ministries pointing out where government resources have been embezzled.

On alleged exploitation of farmers by middlemen, President Museveni called on the Agricultural Extension workers to carry out research on prices of agricultural products on the international market and help farmers to properly bargain for fair prices of their produce. He also said that Government may have to suspend work on some of roads’ building in order to settle cattle compensation war claimants and veterans.

The Lango Sub-Region leaders complained about the late delivery of seedlings and planting materials by officials from the Operation Wealth Creation (OWC) project saying it affected previous season’s production. They, however, reported the inputs have been availed in time this season. They called for protection of wetlands to conserve the environment and for strong legislation on alcohol consumption that has affected production in the villages. They also appealed to government to have in place a programme for low cost irrigation to mitigate the danger posed by long droughts.