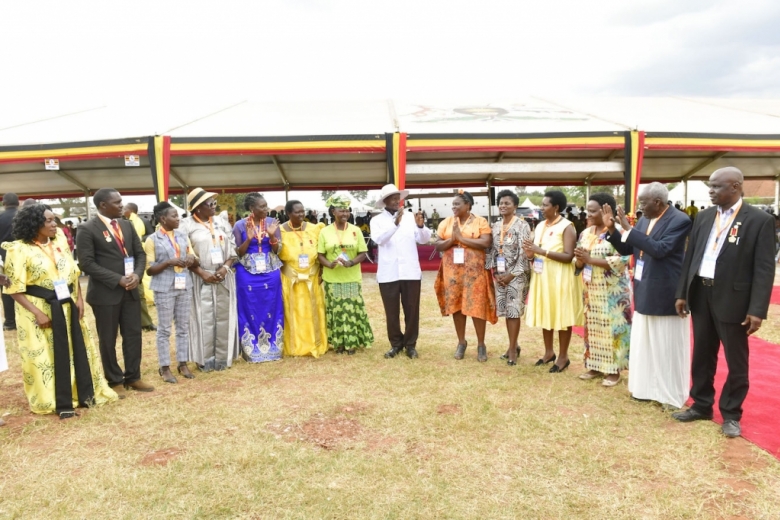 He further pointed out that men should be sensitized not to beat women or even a child describing the act as cowardly.

“I believe in talking but not beating a woman or even a child. Why do you want to beat a woman who is weaker than you. If you want to fight, look for fellow men. The real serious problem is economic dependency that must be solved,” he said.

The President was speaking at the national celebrations for the International Women’s day at Malukhu grounds in Mbale district.

The colorful ceremony was characterized by a spectacular parade formed by only women in the forces and other civilian groups and was celebrated under the theme ‘Celebrating 25 years of the 1995 Constitution: Milestones on Promoting Gender Equality and Women’s Empowerment in Uganda’.

The President who was accompanied by his wife Mrs. Janet Museveni was reacting to a concern raised by the Minister of Gender and Labour Hon. Frank Tumwebaze that gender based violence is now on the increase with little action by the security agencies on the culprits.

President Musevei pointed out that the issue of violence was already provided for in the penal code but the only hindrance is that such cases are not reported.

On the issue of rape and defilement, President Museveni said that the law is already in place and it is death sentence.

The President urged victims of gender-based violence to report to political leaders or any other leader in their areas in case the police fail to act.

The President however emphasized the need to economically empower women adding that it is not easy for a husband to beat an economically independent woman.

The President called on the Ministry of Gender to always monitor the emancipation of women, adding that the money should be increased on the women funds.

He also urged women to get economically empowered through the four sectors that include commercial agriculture, industries, services and ICT as well as public service that has limited slots for employment.

President Museveni told the huge crowd that the NRM government has strived to support as well as emancipate women and the girl child by introducing technologies that reduce on their labor like the fetching of water from distant water points carrying pots on their heads or looking for firewood in the bushes. The new technologies will leave the girls with enough time to concentrate on their studies.

The President cited the cassava factory in Nwoya district that processes cassava to make ethanol that is used in cooking stoves instead of charcoal or firewood.

“Cassava is not only for food but you can make petrol out of it that is used for cooking instead of firewood or charcoal. There are stoves that use ethanol and the two point cooking stove is sold at Shs 250,000 and can last for 10 years. You need Shs.60,000 for ethanol in one year for cooking,” he said.

He noted that this was much cheaper than using charcoal and once adopted, will save the forests and the girl-child for looking for fire wood in the bushes.

The President who saluted all Ugandans especially women on celebrating their day also told the gathering that government has supported women in many sectors like health, water, education, politics and in the armed forces citing the guards that formed the spectacular parade of the day.

He said in the 1995 Constitution, NRM deliberately addressed challenges faced by women in the country especially in the areas of legal issues and politics.

President Museveni thanked the European Union and the United Nations for their support and later launched the Spotlight initiative program to eliminate violence against woman and girls and also the National Report on Implementation of the Beijing Declaration and Platform for Action.

The President also launched the Social Assistance Grant for the Elderly Persons managed by the Mobile Post Bank and gave out cattle to women leaders of Mbale.

Golden Jubilee and Nalubale Medals were also given out to women from various institution in recognition of their exemplary service to the nation.

The Minister of Gender Hon Tumwebaze called on all leaders at all levels in the country to support the efforts of his ministry and security agencies in fighting Gender Based Violence.

Officials from the United Nations led by the country representative Rosa Malango graced the function.

Other guests included Ministers, Members of Parliament cultural leaders and a powerful delegation from Kenya among others.