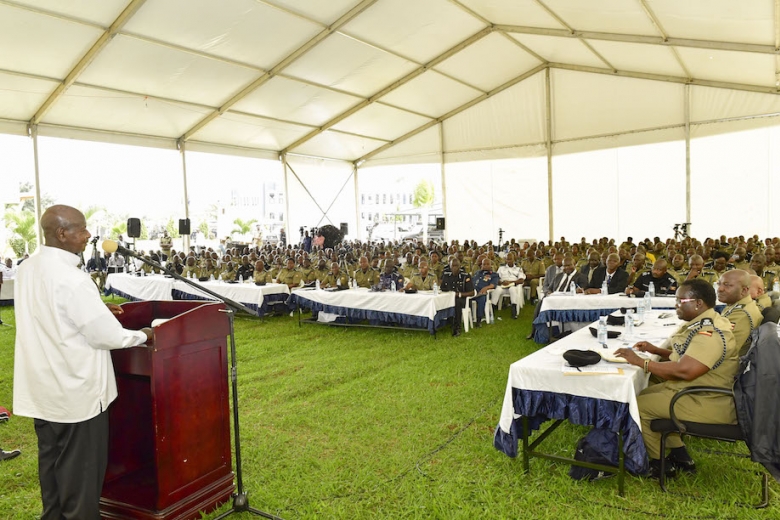 President Yoweri Museveni has strongly appealed to the leadership of the Uganda Police Force to design a clear, holistic and simplistic plan that will make the Force more effective in carrying out their mandate of keeping law and order, curbing crime, protecting lives and property of all Ugandans.

The theme of this year’s Police Council meeting is: “Strengthening Our Achievements and Finding Solutions to Policing Challenges to Guarantee Public Safety.”

The President proposed that the police could for example deploy a 20 man police force in each and every sub-county in the country and said that with such a force in a sub-county with a 24 hour telephone line for the public to call with over 23 million Ugandans already connected on mobile networks, the police, with help of the public would effectively detect and quickly respond to crime and secure the public.

The President however observed that in order for the police to deliver on her mandate they needed ideological clarity so as to understand the importance of their service to the citizens and the country.

“The police need to know their mission in their service which is to support the prosperity of their relatives and this is done by availing them with an enabling environment to produce goods and services. The police should protect the lives and wealth of the population.

Mr. Museveni expressed concern that although the National Resistance Movement strengthen many laws that are meant to harshly punish criminal police and the courts of laws have continued to neglect them and go on to grant police bonds and court bails to core criminals such as those involved in defilement, homicide, murder, rape and terrorism.

The President appealed to police leadership to improve on their supervisory role and monitor how their juniors do their work. He said that the police leadership needed to do on spot assessment and also interact with the public if they were to understand how good the conduct of the police was.

The President further told the police council that for the police to deliver on its Mandate the police leadership needed to plan and work on improving the welfare of the police force.

He at this point proposed the police force should build 18 police secondary schools in the 18 traditional regions of Uganda to relieve members of the force of the social pressure of paying school fees for their children yet there remuneration has not reached the preferred standard. He said that for the primary school children of the police officer they can join the children of the other citizens in Universal primary education program. He also said that government was to look into increased funding and remuneration of the police force.

The inspector General of Police Martin Okoth Ochola said that the police leadership always uses the police council meeting to review on the police force policies and performance and 2019 police council meeting was very important because of the challenges the force was facing in combating crime in the country. He however assured the President that the Uganda Police Force has the resolve to combat crime and ensure law and order especially as the country draws closer to the 2021 election period.