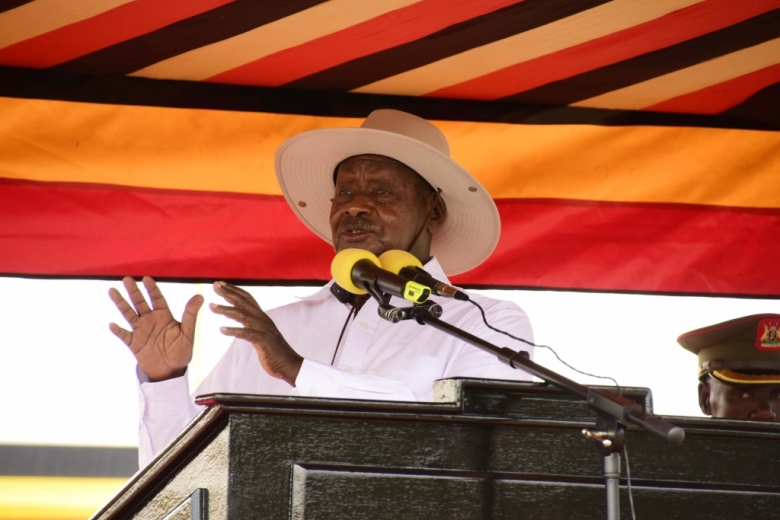 President Yoweri Museveni has re-echoed the need for Ugandans to change their mindset and carry out commercialized agriculture so as to increase their household income and become wealthy.

The President was addressing the nation during the 56thIndependence Day celebrations held at Kasasa grounds in Kyotera District. The celebrations ran under the theme ‘Standing Tall as We Celebrate Achievements of our 56 Years of Independence.’ He congratulated all Ugandans on their country’s 56thindependence anniversary.

“Many people don’t understand the role of commercial agriculture yet and are still relying on subsistence agriculture. I ask that every family that has more than one acre of land should embrace small-scale agriculture. We have a tendency of coming here to celebrate but we celebrate in poverty,” he noted.

Mr Museveni also used the occasion to inform Ugandans that prior to his coming to the celebrations, he had launched CCTV cameras’ installation project in Nateete. He, therefore, re-assured the public that the CCTV camera project would soon spread across the country adding that the project would help reduce the current crime rates in Kampala City.

“Because of the congestion of the City, criminals have taken advantage of it and have managed to kill few people. The only power that these urban criminals have is to hide like mosquitoes and lice. These people are cowards for not fighting openly. They are lice! They have touched on leopard's tail and they will see,” he said.

President Museveni was happy to note that Uganda was doing well economically and progressing. He said that the country’s economy has grown by 6.1% and attributed it the increased infrasturactural developments such as roads.

During the celebrations a number of people were awarded medals for their contribution and service to Uganda. The medals’ categories included the Golden Jubilee Medal for outstanding individuals that had served Uganda in the last 50 years; the Nalubaale Medal for civilian activists who had politically contributed to the country; the Rwenzori Star Medal being the highest military decoration given to soldiers for exemplary military service and the fourth medal category was Masaaba Star medal, the highest military decoration for outstanding service in the military.