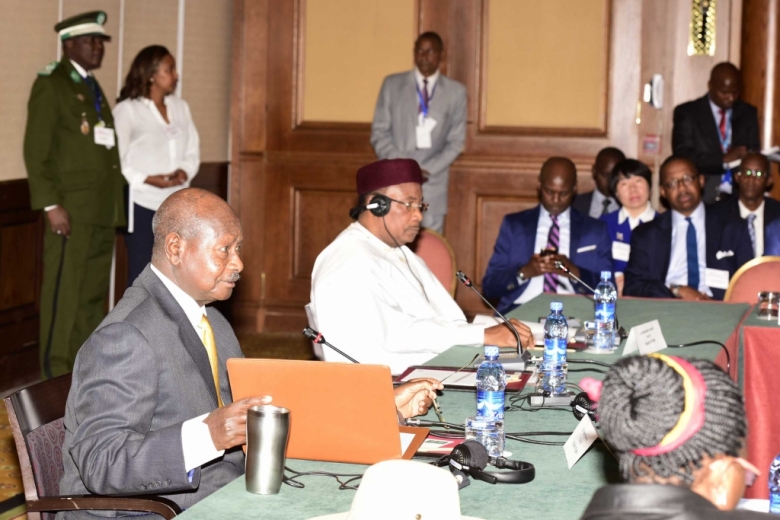 The President was speaking this morning at the Africa Business and Investment Forum held at the Sheraton Hotel Conference Centre in the heart of Addis Ababa, Ethiopia.

The forum, one of the key activities conducted besides the 30th African Union Heads of State Summit, was convened by the Corporate Council on Africa and the United Nations Economic Commission for Africa.

In a discussion moderated by Mr. Stephen Karinge of the Economic Commission for Africa, President Museveni said Africans’ effective demand was on the rise, offering great opportunity to investors.

"Fifty-three years ago, I took my first lesson in Economics and the teacher wrote on the blackboard, saying demand equals desire plus ability to pay. If you have only desire minus ability to pay, that is not demand," he said.

"Desires of Africans are slowly being backed by ability to pay. Ten years ago, Africa's purchasing power was US$500 billion. Today, it is US$8.2 trillion. Africa's demand has grown 16 times. If you are a businessman, this should click," said President Museveni.

The President told the gathering that "conservative" projections showed that Africa's purchasing power would be US$36 trillion by the year 2050, noting that it provided opportunities to investors.

Speaking to the gathering of mainly American investors, President Museveni indicated that they already had comparative advantages in both public and private savings, technology and entrepreneurship, which would offer them a competitive edge.

He, however, warned that the American entrepreneur spirit needed to be stepped up, considering the speed and effectiveness of their Chinese counterparts.

"An entrepreneur is someone who has spectacles to see where opportunities are. The Chinese have been coming to my country while seeing and taking opportunities which the Americans are not seeing," said the President.

Africa's market, said President Museveni, was growing, as he cited the case of milk in Uganda. Years ago, said the President, milk consumption per person per year in Uganda stood at 18 litres.

"Today, the per capita consumption of milk per person is 60 litres per year. But the World Health Organization says you should drink 200 litres per person per annum. This is all business opportunity for you," he explained.

On the question of returns on investment, President Museveni said Africa was ahead of the other continents.

"Business is not philanthropy. It is about profit. The statistics I have show that if you invest in the US, return is 5%, Asia 8%, Europe 6%, Middle East 8% while Africa offers 12% return on investment. If you are interested in profit, Africa is the place to come for investment," he said.
Speaking particularly about Uganda, President Museveni said the country's economy has been growing at an average of 7% for the last 20 years despite the bottlenecks.

"We had a lot of bottlenecks like low electricity and high transport and money costs. We have addressed or are addressing all these bottlenecks. My strategic thinking tells me Uganda is the right place to go," he added.

President Museveni said these correct economic initiatives had caught the eyes of researchers who were now confirming what he (Museveni) had known for long; that Uganda's economy will be fastest growing.

"The Harvard Centre for Strategic Studies recently did a study, saying  East Africa will be the fastest growing economies by 2025. Uganda tops the list followed by India. I already knew that Uganda will be a modern place in the world. Please read that report," he said.

Pitching for Uganda's tourism, President Museveni said the country is unmatched on this front, citing the great weather and idyllic tourism sites.

The President said: "On aspects like tourism, Uganda has no comparison. Uganda is one of the only two points on the globe on the Equator with a high elevation. I hear the other point is in Ecuador though I have not been there. This offers us the perfect weather. We don't have to warm and cool the air."

The President noted that although Africa suffers the problem of fragmented markets, the leaders were undertaking efforts to ensure integration and resolve this issue.

"By 2050, Africa will have 2.5 billion people. We were cut into 54 colonies. African leaders have worked hard and we are starting process of market integration so that it is one market," he said.

One other panelist, Niger’s President Mahamadou Issoufou, told the meeting that the just concluded 30th African Union Heads’ of State Summit had comprehensively tackled the issue, on the subject of integration.

He said the Summit had discussed the creation of the Continental Free Trade Area and that two instruments to ratify the undertaking had been completed. Another two, would be fast-tracked and an extra ordinary assembly of the heads of state held in Kigali in March to complete the process.