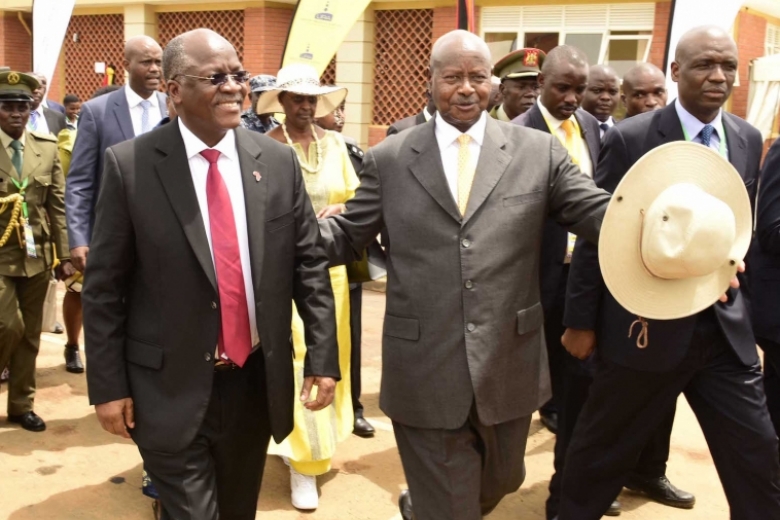 President Yoweri Museveni has urged Ugandans to make sure that they prepare to benefit and earn from the Hoima- Tanga crude oil pipeline.

This was during a rally President Museveni and his visiting Tanzanian counterpart Mr. John Pombe Magufuli addressed today at Kyotera Local district headquarters.

“We have brought wealth to you. The pipeline is going to cost US$3.5 billion, which is a lot of money but make sure that you earn from it. If you have a hotel, those who work on the pipeline will lodge in it; if you have food in the garden, you can sell it to these workers and if you have a car for hire, you can use it,” said Mr. Museveni.

The President said that since impediments had been removed between the borders of Uganda and Tanzania, there was now free movement of labor and trade that would create wealth and employment in the long run.

The President appreciated Tanzanians for having had a crucial role in the liberation war of Uganda adding that both countries have a war of alienating poverty from their citizens.

President Magufuli on his part appreciated the warm welcome from President Museveni and the First Lady.

“I have been out of Tanzania four times but the two times I have been out, it has been to visit Uganda. This shows how important the relationship between Tanzania and Uganda is to me,” remarked President Magufuli.

He said that it was because of President Museveni’s spirit of brotherhood for Uganda and Tanzania that he had accepted to partner and fund a costly project which in the end will develop the nations.

“Idi Amin was in Uganda but he did not discover the oil. All the past Presidents did not see the oil but the experienced Museveni discovered it and using his professionals, he studied it and began the process of drilling it. A prophet is not honored in his country but back in Tanzania, we are so grateful to Mr. Museveni,” he said.

He commended Mr. Museveni for having helped the Tanzanians who were recently involved in an accident in Uganda.

"The President helped us during the tragedy and took some of the survivors to hospital. He later facilitated them back to Tanzania and for that, Mr. Museveni, we are very grateful," he added.

He also thanked the President for the condolence message and support that Mr. Museveni sent when Tanzania was hit by an earthquake. Mr Magufuli reiterated that Tanzania's support to Uganda dates as far back as the liberation war and that this support has always and will continue.

President Magufuli also assured the people that Tanzania is ready to work with President Museveni to fight the poverty war in both countries and encouraged the people to welcome the crude pipeline project.