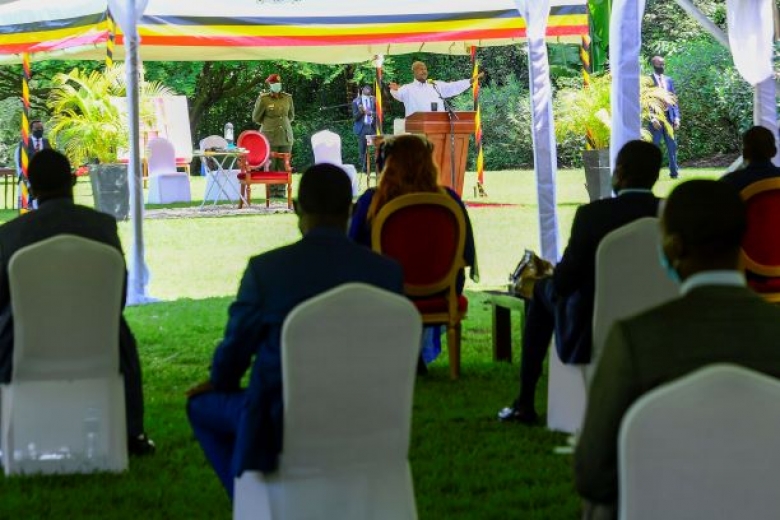 President Museveni has said that the government has the capacity to create 70 million jobs if the message of commercialized agriculture is taken seriously.

The President was  speaking during the commemoration of the International Labour Day at State House Entebbe.

While castigating the export of Labour, President Museveni said he is against the practice . “For me, I don't believe in Labour export. Countries that externalize labour are countries that have missed something. I have proof. I have never seen South Koreans exporting labour, the only S. Korean I have seen is Ban Ki-Moon. S. Korea is half the size of Uganda but you don’t see them. Me I am now for the South Korean approach,” he said.

As a solution, Museveni said the country has the capacity to create up to 70million jobs, if there is concentration on; Industry, ICT, services and commercial agriculture.

“We are going to create the jobs; the problem is the reluctance to take our advice which has worked. The jobs are there but they will only come in big numbers if we listen to NRM's principle of social-economic transformation,” President Museveni said.

President Museveni made the estimation of 10 million homesteads in Uganda, of which at least 7million are in rural areas with access to some land.

“Let us take it that 7 million homesteads have access to an acre of land at least because even calculative agriculture can blossom on an acre. I have proof from a man called Nyakana in Fort Portal, he is doing wonders on an acre.  Problems come when you have no kibalo (calculation),” he said.

The President said if these can be supported to do commercial agriculture and employ at least 10 people each either directly or indirectly, that would be 70million jobs.

“We would have jobs here to even give other people some. Here in central most of the people who run around as Baganda many of them are Banyarwanda, they came because there were jobs here with no one to do them locally during the colonial times because Uganda is so rich,” he said.

The President said that while in Kyankwanzi he told the MPs how in 1789 France had four (4) social classes.

“If you go to France now the peasants are no longer there, they have disappeared. Here we are preserving the peasants.

Speaking on industrialization, President Museveni said only 30,000 Ugandans were working in factories by 1986.

However, today, an estimated 700,000 Ugandans are employed in the mushrooming industries.

“This proves that when we get more factories, we shall create more jobs and also consolidate the African markets.”

“We are reforming the labour export market by insisting on certain requirements for labour export companies. For instance, we are insisting on insurance bonds such that should workers get problems while abroad, we can address their problems using that insurance,” he said.

Mr. Tumwebaze also said they are investing in training workers and skilling youth to ensure that the country does not export a low-quality workforce which is not at the standard and appealing to international standards.