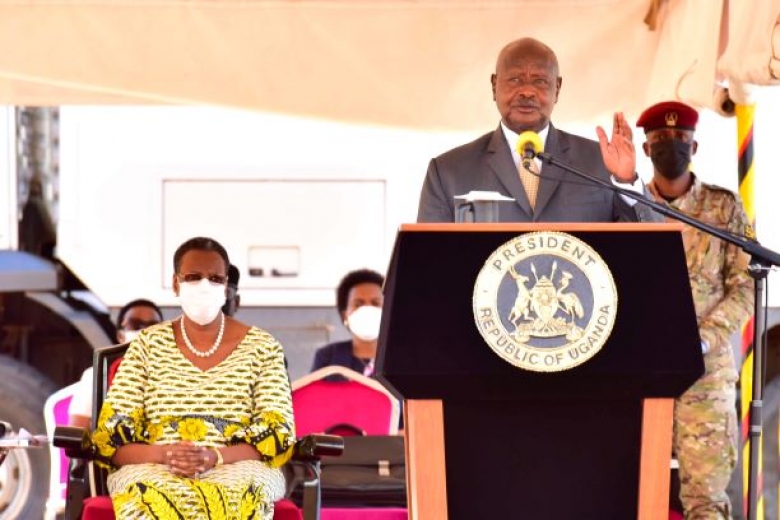 President Yoweri Museveni has described the 2021/2022 budget speech as a ‘wonderful one’ that has disclosed the reduction in numbers of Ugandans still practicing subsistence agriculture from 68 % in 2013 to 39 % ‘According to the budget speech, poverty rates have reduced in West Nile, Elgon region and other areas. 61 households are in the money economy. This is great news that means that we are really moving,” he said.

President Museveni who was accompanied by the First Lady and Minister designate of Education and Sports Janet Kataaha Museveni was making his remarks shortly after the reading of the 2021/2022 budget presented on his behalf by Hon. Amos Lugoloobi MP Ntenjeru County North in Kayunga district at Kololo Independence grounds.

This financial year budget 2021/2022 that was presented under the theme ‘Industrialization for inclusive Growth Employment and Wealth Creation’ saw most of the key wealth drivers such as agriculture, industry, services and ICT get most of the financial allocation. Other areas included infrastructure.

President Yoweri Museveni used the occasion to warn trouble causers he likened to parasites in the country, to end their activities and join other Ugandans to concentrate on wealth creation.

“I want to tell the parasites that we are here to crash them. People are busy producing wealth, you go attacking them! Who are you,” he asked.

The President told the nation that the isolated cases of criminality being witnessed like the attempted assassination of General Katumba, where his daughter and driver were killed, will certainly come to an end as Police and other sister security agencies are going to step up security directives.

He said he has already directed the Minister of state for Internal Affairs (designate) General Muhoozi to follow up the process of installing digital monitors to every vehicle and motor cycles to help in speeding up investigations of crime.

“I don’t want any waste of time in investigations. I have told General Muhoozi to get on with that process,” he said.

He said another solution in the combat of crime is the strengthening the forensic capacity of the Police as wrong elements always leave behind a lead in the scene of crime that can be traced in the investigations.

He urged wanainchi never to tamper with anything they find at the scene of crime as that can jeopardize investigations.

“According to Police, one of the criminals dropped behind his handkerchief some body picked it before the police arrived. Please respect the scene of crime and if you still have that item bring it back, it can help in tracing the criminals,” he said.

President Museveni added that gun finger- printing is another solution in combating crime, disclosing that police has already finger printed the guns that were used on the attack of General Katumba. He said the attack on General Katumba was not an ordinary crime but a definite motive that will be discovered soon.

He pointed out that the people who use assassinations are from bankrupt groups who are not sure of themselves.

“It is bankrupt to kill people. Why should I kill anybody because we don’t agree,” he wondered?

On the issue of the proposed new cabinet, President Museveni said he decided to surprise everybody because just like Jesus he decided to go for the fishermen instead of the elite Pharisees.

On human capital, President Museveni directed the Minister of Health designate and the Prime Minister designate to absorb all qualified doctors in the country to health facilities up to sub-county level.

On the lucrative venture of fish maws that are on high demand, the President said he is going to contact his Chinese counterpart President Xi to wave off taxes levied on the maws adding that Uganda could earn $ 156 billion annually from the trade that will also provide employment to the youth.