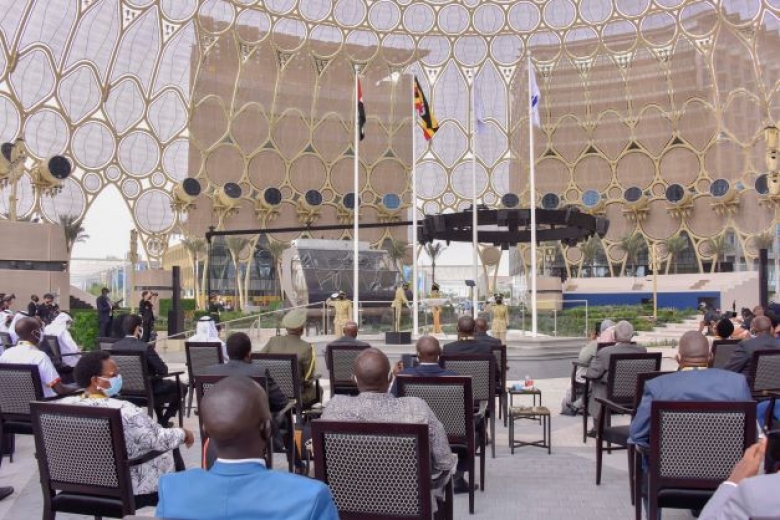 President Yoweri Kaguta Museveni presided over celebrations at the Uganda National Day at the Dubai Expo 2020 in the United Arab Emirates.

Arriving at the leadership Expo pavilion, President Museveni and his delegation were received by H.E Sheikh Nahayan Mubarak Al Nahayan, the Minister of Tolerance in the United Arab Emirates.

It was a great honor as the Ugandan flag and that of UAE were raised and national anthems played to symbolize the warm brotherly relationship Uganda and UAE enjoy.

Dubai Expo 2020 is a World Expo currently hosted by Dubai in the United Arab Emirates, which was officially opened on the 1st of October 2021 and is to run for 182 day with over 192 participating countries, Uganda inclusive.

Speaking at the Expo, President Museveni said that Uganda is the right place at the right time for any serious business people looking for profitable investments.

“We are here to talk about profit, how do you maximize profit. Because you can’t do business when you are making losses. So, if you want to make profits, Uganda is the right place at the right time to invest in,” President Museveni said.

In order to make profits continuously, President Museveni said one needs three elements i.e. to produce goods or service, the market and infrastructure.

“To make sure that the goods or service you have produced reaches the market, you need infrastructure. If you want business to succeed, these three are vital,” he said.

Mr. Museveni told his hosts that Uganda has a highly educated population amongst whom are scientists who can produce knowledge-based services.

On the side of the market, President Museveni revealed that Uganda has a market population of 42m people and is estimated to be 100m in 30 years.

“Uganda is not the only market we have. When you produce in Uganda, you can sell in all African countries, we have agreements to sell in USA, Europe, China etc. therefore the market is there,” he said.

President Museveni commended the UAE government for organizing the Expo event where the world can meet and discuss prosperity. He commended the visionary leadership of the forefathers of United Arab Emirates whose contributions have seen UAE growing economically.

“The UAE is a challenge to Africa because they have turned a desert into a center of affluence simply because of the vision of their leaders. They turned geography into an advantage,” he said.

President Museveni also commended the UAE for the seriousness in handling Covid19 pandemic and added that they are following his line of every one must test.

“Yesterday when I arrived, they took me for COVID test. In Africa, sometimes we say, ‘big’ people should not be checked. But I was happy to note that everyone here must test,” he said.

Speaking at the event, H.E Sheikh Nahayan Mubarak Al Nahayan, the Minister of Tolerance in the United Arab Emirates welcomed President Museveni to UAE and thanked him for sparing time to come and attend the function in person.

“Your Excellency, its an honor to be with you today to celebrate the National Day of Uganda the pearl of Africa. We are pleased to have your presence here”. Sheikh Nahayan said.

He commended President Museveni’s leadership for a remarkable role in peace and economic building of the country Uganda.

Sheikh Nahayan Mubarak Al Nahayan noted that Covid -19 pandemic has presented many challenges globally even when mankind has become resilient.

“We are looking forward to working together with Uganda to recover from the Covid 19 challenges” HE said.

Sheikh Nahayan said that the United Arab Emirates is looking forward to strengthening the bilateral economic ties between the two countries and are ready to continue investing in Agro-processing, Tourism, ICE among other sectors.

After the remarks from their Excellences, the host and guests were treat to a cultural folklore performance by the Crane Performers showcasing Uganda’s culture through music and dance.

Thereafter, President Museveni went on a guided tour of the Ugandan Pavilion together with His Highness Sheikh Mohammed Bin Rashid Al Maktoum, the Vice President and Prime Minister of UAE and Ruler of Dubai.

President Museveni was also taken to a guided tour of the UAE pavilion by the H.E Sheikh Shakhboot Nahyan Al-Nahyan the Minister of State in the Ministry of Foreign Affairs and International cooperation of UAE.

The President winded up his tour of the Expo by signing the book symbolizing the honor and his presence at the event.

Among the Ugandan delegation that attended the cerebrations included The Speaker of Parliament the Rt. Hon. Jacob Oulanya, the third deputy Prime Minister Rukia Nakadama, Ministers, members of Parliament and the members of the business community.