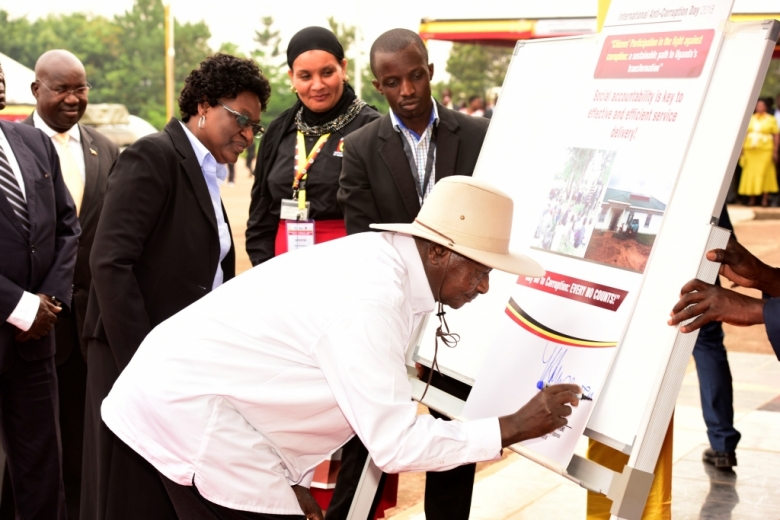 Today, I joined Ugandans in marking the International Anti-Corruption Day at Kololo Independence Grounds in Kampala. I later officially commissioned the State House Anti-Corruption Unit to be led by Lt Col Edith Nakalema.

By 1986, we had seven major problems associated with corruption; extra judicial killings by the army, extortion at roadblocks by soldiers, poaching in national parks, wetland encroachment, embezzlement of public funds, bribery and nepotism.

The first three we dealt with quickly. We are still dealing with the others. Embezzlement is largely done by the accounting officers; the permanent secretaries, chief administrative officers, gombolola chiefs and town clerks.

With the new anti-corruption campaign I am launching, if government money is stolen, these are the people I will come for. These corrupt people should also know that we have many young educated Ugandans. We shall easily replace them. A few corrupt people can no longer blackmail us.

In this new campaign, we are basically stoking the fire. You can report cases of corruption to the State House Anti-Corruption Unit on 0800202500. Lt Col Nakalema is my watching post on this. She will keep me posted and pursue cases of corruption with the other agencies.

We are going to study the law to ensure we confiscate wealth acquired through corruption. It will be amended to effect this. I am also convening a meeting with the Speaker and the Chief Justice to address concerns of corruption in their institutions.

Also, we have about Shs54 billion uncollected from corrupt officials even when court has ordered so. I am directing that this money is recovered immediately. I will also demand answers on why this has not been done yet.

Finally, I urge the media and the general public to join us in this campaign. Please expose and report corrupt public servants.