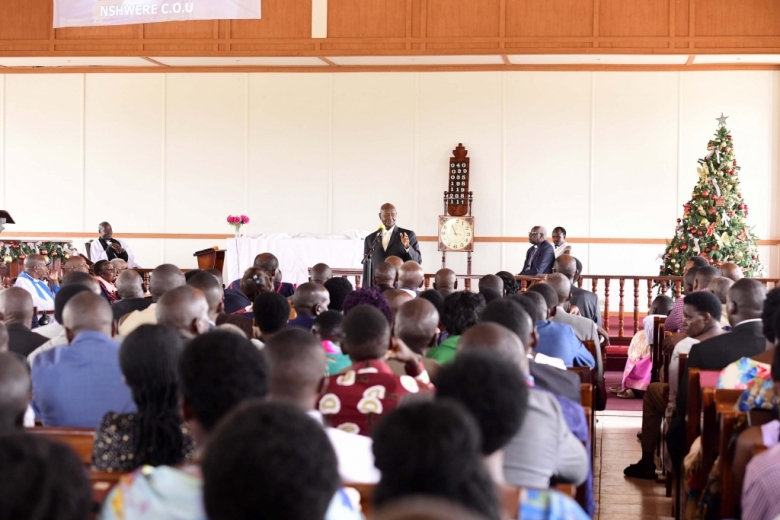 President Yoweri Museveni has called on the people of Kiruhuura District in particular and Uganda at large to fully utilize their God-given talents to cause development in their homesteads and in the whole country as well.

The President made the call at Nshwerenkye Church of Uganda in Kenshunga Sub-County, Kiruhuura District during this year’s Christmas service whose main celebrant was Rev. Meshach Kihondwa. The President, who was accompanied by the First Lady, Mrs. Janet Museveni and other family members, used the occasion to congratulate the people of Uganda upon concluding 2019 and for celebrating Christmas.

“I congratulate you for concluding the year and for celebrating Christmas. Thank you for loving and respecting God. It is good for all of us. Religion played a big role in waking up the people. I call on you to fully utilize your talents. I am happy to note that you are committed to God and are engaged in income generation,” he said.

Mr. Museveni said that in 1986 the people of Uganda were asleep and did not know that there was wealth in cattle keeping. He noted that having sensitized the people of Kiruhuura District in particular and Uganda as a whole, wananchi have appreciated positively that cows are lucrative. He added that he and the NRM Government taught wananchi to produce milk and grow bananas, sugarcanes and several other products in order to create wealth for their families and the country at large.

He commended Ugandans for waking up to fully participate in sustained efforts to chase away poverty from their homesteads adding that the country today enjoys abundant output of agro products. He observed that in the past, Uganda used to import milk and butter. He, however, noted that currently, Uganda imports infant milk worth US$ 100 million per year saying that this situation should be reversed since the country is experiencing excess milk production. He revealed that plans are underway to process more products from milk and ethanol from maize.

Mr. Museveni urged Ugandans to always carry out meticulous calculations on the projects that they choose to undertake. He asked the people of Kiruhuura District and the neighbouring areas to concentrate on rearing exotic cows that are capable of producing at least 20 litres of milk per cow per day or the Ankole cows that produce at least 9 litres per cow per day. He noted that under the zero grazing system, farmers are able to rear 8 exotic cows or 12 Ankole cows in one acre of land. He emphasized that cattle farmers need to grow sufficient pasture in order to ensure better and profitable dairy undertakings. He thanked the people of Kiruhuura District for taking the education of their children very seriously and also for stopping alcoholism.

The First Lady, Mrs. Janet Museveni, congratulated the congregation who turned up for the Church service to celebrate this year’s Christmas. She was grateful to God for the day and prayed Him for a happy New Year of 2020.

Rev. Meshach Kihondwa, who was the main celebrant of the service, observed that Christmas is great because it is a celebration of the birth of Jesus Christ who came into the world to liberate and reconcile humanity to God following the fall of our fore parents, Adam and Eve.

He criticized acts of same sex marriages and wondered why those so-called unions should merit description of human rights at all.

“Why should satanic activities of men marrying fellow men be referred to as human rights? Gay relationships, he added, are contrary to African culture.”

He saluted President Museveni and the First Lady for their contributions to the building and development of Nshwerenkye Church.