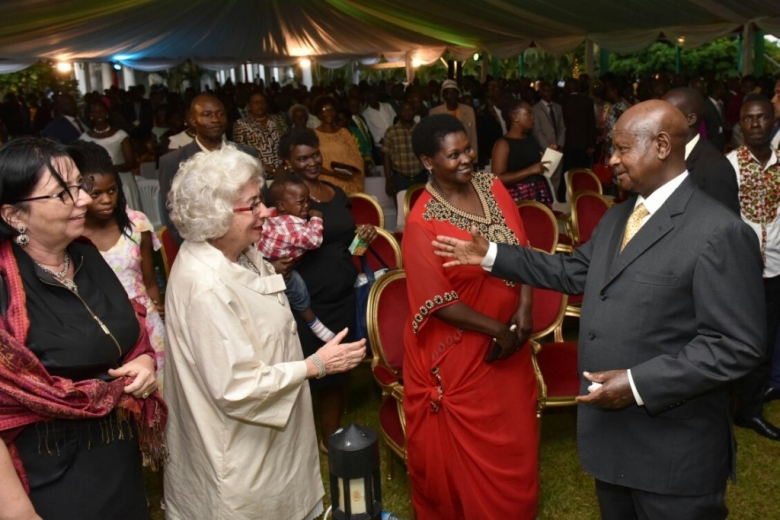 President Yoweri Museveni has urged the people of Uganda to use the unprecedented freedom in their country carefully.

“In Uganda, there is unprecedented freedom. We do not allow people to disturb the freedom of others. The freedom must be used carefully,” he said.

The President made the remarks yesterday at State House Entebbe during the annual National Thanksgiving Service whose theme was: Those who trust in the Lord are like Mount Zion which cannot be shaken but endures forever.

The President warned against unbridled alcohol consumption in the country and observed some people from neighbouring countries are flocking in Uganda because of the freedom to enjoy alcohol consumption that they cannot access back home. He cautioned all the people against the vice of leading reckless lives and called on all leaders to influence the people by teaching them and giving them examples. He reiterated that the leaders should do much more to sensitize people about excess freedom that could easily mislead the wananchi.

Stressing the need hard work for all religious leaders in the country the President expressed happiness that working together has become a culture. He commended the Inter-Religious Council in Uganda for a job well done and also for the positive progress so far registered. He observed that Uganda rejected religious sectarianism and added that the country cannot tolerate that disorientation.

“We cannot tolerate the nonsense of sectarianism. Such disorientation should be rejected in Africa,” he said.

Regarding the environment, President Museveni expressed concern over the practice of interference with the wetlands by people. He informed Ugandans that 40% of the rain in our country comes from evaporation from the wetlands with the remaining 60% generated from the Pacific and Indian Oceans. He said that the NRM Government has made plans to promote irrigation so that the country may stop relying entirely on rain fed agriculture. He added that the Government is working towards the provision of solar powered pumps for purposes of irrigation. He revealed that plans are underway to manufacture solar powered equipment within the country.

Mr. Museveni stressed that people should be helped to get out of the wetlands so that ways and means are devised to gradually restore the core of the wetlands. He called for support by all the people in the efforts to restore wetlands.

During the service, the President launched the Roadmap for 2017 as the year of the family. The program proposes to have the 1st day of 2017 dedicated to the fathers, the 2nd day to mothers while the 4rd and 4th days of 2017 are dedicated to teachers and to children respectively.

The First Lady, who is also Minister of Education and Sports, Mrs. Janet Museveni, in the closing prayer beseeched God the almighty to strengthen all people for the journey ahead. She thanked God for all He has done for Uganda, the gift of life, for every family in the country, for a diversity of talents and for peace in the country as well as the region.

The Minister of the Presidency, Esther Mbayo, congratulated President Museveni over his re-election to the Presidency. She said this was a sign that the people have trust in him. She saluted him for helping wananchi in improving their well-being. She commended Mrs. Janet Museveni for leaving a strong legacy among the people of Karamoja Sub-Region.

State Minister for Gender, Peace Mutuuzo, disclosed that the Roadmap for year of the Family 2017 that the President launched, will run under the theme: To strengthen the Family to build the Nation.

The Sermon was delivered by Dr. Joseph Serwadda of Victory Church Ndeeba who commended the President for relentless support to religious institutions in the country. He said that they need Government to help the Pentecostal Churches unite.

Dr. Sserwadda thanked God for giving President Museveni as a gift to Uganda adding that the President is indeed God’s choice for the nation. ENDS