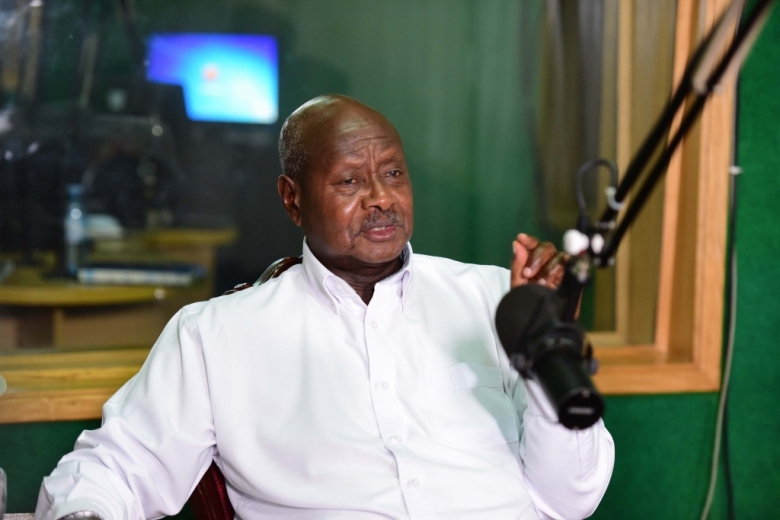 President Yoweri Museveni has called upon radio stations to contribute to the development of the country by providing Ugandans with the right information.

President Museveni who was accompanied by the Minister of Minister of ICT and National Guidance Frank Tumwebaze, the Minister for Housing Chris Baryomunsi and the Deputy Attorney General Mwesigwa Rukutana was speaking at Vision FM radio station in Mbarara Municipality where he addressed the nation on land matters and other national issues.

The President said that instead of informing Ugandans about government projects and how the country stands to benefit from the projects, the media and the opposition politicians are spreading falsehoods about the proposed amendment to the land law.

“I have come to tell you that government is not trying to steal people’s land. We want to change the law for public interest. We need to construct roads, the railway and electricity. When we make the road to Lyantonde or the Bypass here in Mbarara town, Museveni does not have any shares in it. It is for everyone’s benefit,” he said.

The President said that it was the National Resistance Movement (NRM) government that legislated to give Ugandans land ownership in the 1995 constitution and therefore the same government cannot be the one to take away from Ugandans the right to own land as the media and the opposition politicians are telling Ugandans.

Mr. Museveni explained that the proposed amendment to the land law does not aim at grabbing land from Ugandans but is rather meant to ease government acquisition of land for infrastructure development such as the railway, roads and electricity. “For government to acquire someone’s land, the owner must be compensated and that government was also coming up with more avenues for discontented landowners to appeal in order to receive fair compensation,” he said.

President Museveni said that landowners who reject government compensation and want more money compared to what their property was valued at also challenge government as this in turn delays contractors hired by to do government projects as the cost of things such as cement keeps going up.

The President also faulted government bureaucrats who have access to government contracts and know where the projects will be constructed and thus go to those areas to acquire land so that they can benefit from the compensation.

President Museveni said that if the 68% of the Ugandan population that is in subsistence farming is to join the monetary economy; government has to build roads, the railway and electricity so that more employment opportunities are created.

President Museveni therefore called upon the media to educate Ugandans about the amendment of the land law and the need for Ugandans to protect their environment. He said instead of wasting time abusing and spreading falsehoods they should teach Ugandans how they stand to benefit from government projects and about the dangers of swamp reclamation and land fragmentation. The President also cautioned the public against encroaching government land and warned those that have planted eucalyptus trees in the swamps to remove them before the National Environment Management Authority does so.

On the issue of the women murders in Entebbe and Nansana, the President Museveni said government was going to put up cameras in urban areas to check on the crime rate. He said that in the past government had focused much on the rural areas such as the north and the west, which had, rebels killing people but now the focus will be shifted to urban areas as the country is now peaceful and all the rebels have been defeated.