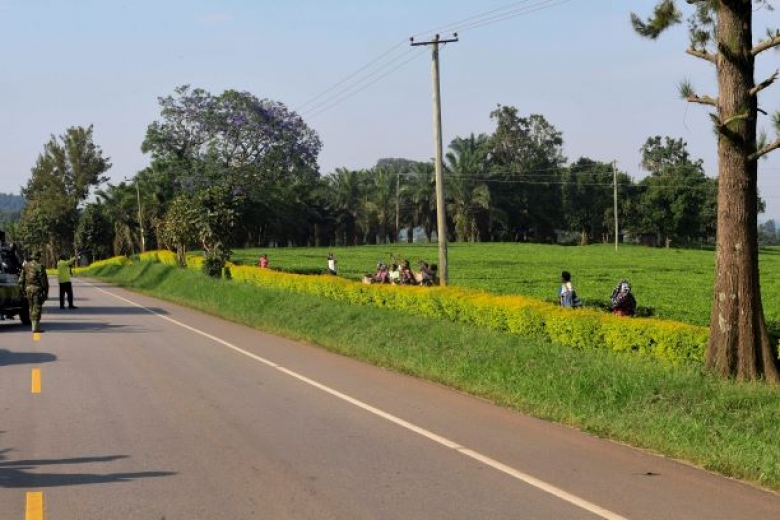 President Museveni  commissioned the newly rehabilitated Kyenjojo- Fort Portal road in Kyenjojo district. The 50 km road which was fully funded by the Government of Uganda at a cost of 119 billion UGX, starts at Kyenjojo, east of Fort Portal on the road to Mubende and ends at T- junction near Mpanga market in Fort Portal Municipality.

President Museveni in his remarks, noted that it was because of the peace and good investment climate in Uganda that has attracted foreign investors who have established businesses here, that have given the country taxes to construct and upgrade roads.

“The taxes that we get from companies like MTN for three years can help make us make 6 roads like these ones,” he said.

Commenting on the road equipment that was sent to the districts to upgrade and maintain better feeder roads, President Museveni noted that there are plans to increase on the money for fuel given districts for the equipment to be in use.

He said, that since the government has done its part of providing electricity through out the country, building schools and hospitals, the people of Kyenjojo also do their part of shifting from working for their stomachs to their pockets by abandoning subsistence agriculture to engaging in modern agro-production for both food and income security.

“The NRM government has done its part. Your job is to eradicate poverty from your homes. You must stop working for your stomachs alone and also focus on commercial agriculture to improve incomes for the pockets,” the President said.

The State Minister for Transport, Joy Kabatsi said that the rehabilitation of the road was one of the promises made to the people of Tooro in 2016-2021, which President Museveni had fulfilled.

“It is a pleasure for us to be here to witness President Museveni fulfilling a pledge he made as part of the strategies in the poverty eradication program in this area,” she said.

She added that other roads such as Fort Portal- Kyalusozi road, Kamwenge-Kiruhura, Kalugutu-Ntoroko etc, were earmarked for rehabilitation and that there are also plans to upgrade Kasese airport.

The Executive Director of UNRA, noted that the rehabilitated road which transverses through the districts of Kyenjojo, Kabarole, Bushenyi and Kasese to the border with DR Congo is an important gate way for tourism and will help boost the sector in the region.

She was also happy to note that the rehabilitation plans for the road was designed by the UNRA in-house design team which shows they capacity and competence levels of the team that the organization has.

“The road was built with a high quality standard and we hope that it can last for the next 15 years,” she said.

She appreciated the NRM government for always availing the agency with the funds to construct and rehabilitate roads and promised to continue working for the development of the country.