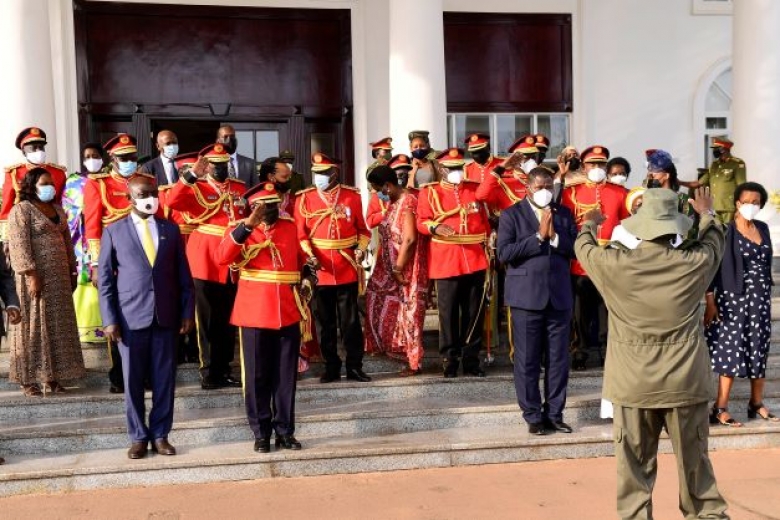 President Yoweri Museveni who is also the Commander in Chief of the UPDF was a happy man as he witnessed what he described as “Success of a miracle” as he bid farewell to 14 retiring General and Senior officers at a colourful ceremony witnessed by family and friends.

“I am happy to be here to witness success of a miracle. I wrote a book – the Mustard Seed – a small seed which was planted but produced a big tree. This here is just a sample! Each individual’s story is a miracle. How each became part of the resistance movement! Everybody has a story to tell,” President Museveni said.

He was  presiding over the send-off ceremony of retiring General, Senior and Junior officers at State House Entebbe.

The President gave a detailed background to the liberation struggle and how each of the retirees became part of the success story of the current professional UPDF army.

Gen. Ivan Koreta is today’s most senior retiree and one of the original 28 boys who were taken to Mozambique for training and who was to return later and infiltrate back into Uganda.

“By the time Kampala was captured, we had a forcé of 9000. Banyankole call it okutubula (Making something small grow big) This is NRM, Ivan was the original seed,” the President said.

The President also cited the story of  RO/16504 Brig. Gen Al-Hajji Moses Kigongo who started the Resistance Committees to support the Popular Resistance Army to popularise the peoples struggle and RO/00170 Brig. Gen. Shaban Moses Lukyamuzi who joined the struggle and started the first Signal Unit of the NRA.

Another Mwanainchi RO/16506 Capt. Nathaniel Mayanja Kitaka was a labolatory technician in Kiboga hospital joined the struggle and even offered Museveni a shower after seven days days. Maj. Gertrude Nanyunja Njuba kept the records bag and acted as the first Comptroller while Maj. Hajjat Jannat Balunzi Mukwaya who was formerly a magistrate became the judge.

“Dont look down on people, everybody is useful. The army will not be strong if you dont have the support of the people. Dont bark at people. We are strong and were attracting all those people,” he said.

President Museveni thanked the retirees for making their country proud.

“Thank you for your contribution. We are proud because you have built a big capacity which has never been there before, a big army of this size,” he said.

He called on them to copy the mustard seed by using their Kasiimo (Pension) to multiply and enbale them to live a diginified life.

“With Kasiimo, go and multiply it. Don’t squander it. Dont go to the villages and become destitutes and spoil our name. People will fear to join the army. Multiply it properly and live a comfortable life,” he said.

The Minister of Defence and Veteran Affairs Vincent Bamulangaki Ssempijja said the Generals leave behind a tremendous legacy and accomplishments achieved under the UPDF and cadres of astute character.

“Go with your heads high up knowing those who wish Uganda well remain indebted to your service. You have diligently served Uganda and exhibited excellence in many fields,” he said.

The CDF Gen Wilson Mbadi commended the Generals for serving with discipline, professionalism, patience, clarity of purpose and diligently and said they have greatly contributed to the fundamental change in the country.

The UPDF retired 14 Generals and 604 senior and junior officers and men. Other ceremonies for the retirees were held at various respective service headquarters, formations and units.